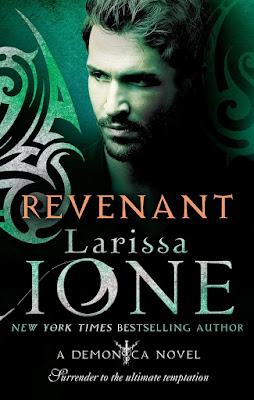 HELL HATH NO FURY . . .
For five thousand years, Revenant believed he was alone in the world, a fallen angel beyond any redemption. Now he finds he has a twin brother who had all the light and love Revenant was denied. Caught in a  tug of war between Heaven and Hell, he must weigh his thirst for revenge against his desire for a mysterious female named Blaspheme - a female whose very origins could deliver him into salvation . . . or destruction.

LIKE AN ANGEL SCORNED
Blaspheme has a deadly secret: she's the forbidden offspring of an angel and a fallen angel. Hunted by both heavenly and satanic forces, she has survived only by lying low and trusting no one. When Revenant claims he can save them both, how can she possibly believe him? But the powerful angel is persistence incarnate and for Blaspheme, there's no place she can hide in Heaven or Hell where he won't find her . . .

Review:
I was incredibly disappointed when I found out that Revenant would be the last book in Larissa Ione's Demonica & Lords of Deliverance series. I've been a huge fan of these books since the beginning and wasn't ready for the journey to end but if you have to go out then it's best to go out on a high and that's definitely been achieved with this book. Thankfully the author has continued to visit the world in a couple of novellas too so even though it's a fantastic end it isn't quite the last we've seen of these characters.

Revenant may be Reaver's twin brother but their very different upbringings have made them almost complete opposites. Reaver was raised in Heaven and has spent his whole life knowing love and safety while Revenant was raised in Hell and both witnessed, suffered and carried out horrendous torture and suffering. Revenant has spent his whole life believing he was a fallen angel so it's no surprise that he's incredibly bitter when he finds out the truth, he is jealous of the life Reaver had and although logically he knows it wasn't Reaver's fault that doesn't make it any easier and Reaver makes a convenient scape goat for his wrath and anger. Revenant is the epitome of dark, brooding bad boy heroes, he's cocky and arrogant and he's done horrible things in his life just to survive. Larissa Ione excels at creating complex characters though, ones who you fall in love with in spite of their horrific actions in the past and ones you are desperate to see redeem themselves.

Blaspheme is a doctor at UGH, she loves her job and all she really wants to do is stay under the radar and be able to treat her patients. She has a major secret though and as the forbidden child of an angel and a fallen angel she has a very large target on her back. Both heaven and hell will destroy her if they discover who she really is so it's important that she doesn't draw the attention of anyone, especially not a dangerous fallen angel like Revenant.

I absolutely loved the romance between these two, Blaspheme is a strong character and she does't take any of Revenant's crap, he's a dominant guy who is shocked that someone could possibly reject him and when the two of them are together the fireworks fly. We also get to catch up with all our favourite characters and see the epic conclusion to the battle that has been building since the start of the Lords of Deliverance series. I really don't want to say too much about what happens but you won't want to put the book down so make sure you've cleared your diary for the day before you start it. I'm a huge fan of Larissa Ione and this whole series has been brilliant, it isn't always easy to finish a story line with so much build up without it feeling a bit of a let down but that definitely hasn't happened here. I'll definitely be rereading this series in the future and in the meantime I'll be auto-buying anything that this author chooses to write.

Source: Initially received from publisher via NetGalley but I also received a print copy from Piatkus in exchange for an honest review