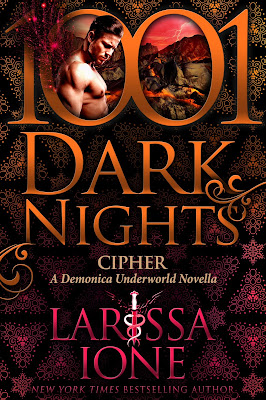 It’s been seven months since Cipher, an Unfallen angel who straddled a razor thin line between good and evil, woke up in hell with a new set of wings, a wicked pair of fangs, and a handler who’s as beautiful as she is dangerous. As a laid-back cyber-specialist who once assisted guardian angels, he’d been in a prime position to earn back his halo. But now, as a True Fallen forced to use his talents for malevolence, he must fight not only his captors and his sexy handler, but the growing corruption inside him…before the friends searching for him become his enemies and he becomes his own worst nightmare.

Lyre is a fallen angel with a heart full of hate. When she’s assigned to ensure that Cipher carries out their boss’s orders, she sees an opportunity to take revenge on those who wronged her. All she has to do is appeal to Cipher’s burgeoning dark side. But the devastatingly handsome fellow True Fallen has other ideas — sexy ideas that threaten to derail all Lyre’s plans and put them in the path of an approaching hell storm.

Danger and desire explode, even as Cipher and Lyre unravel a sinister plot that will fracture the underworld and send shockwaves into Heaven itself…

Review:
As someone who has loved the Demonica series for years I'm always extremely excited when a new book is released and we get the chance to dive back into this world. We already know Cipher, he was Hawkyn's best friend who was captured in one of the previous Demonica Underworld books and dragged into Sheoul by Faile. Now one of the True Fallen Cipher is just trying to hold onto his sense of self as long as possible before evil takes over and he willingly gives up his friends to the demons who are holding him prisoner.

Lyre is one of Cipher's handlers and she's been tasked with getting information from him for her boss Bael. She chose to become a true fallen angel in order to get revenge on the angels who cost her both her wings and her place in heaven but even though that's been her main purpose for so long she has never quite become immune to the evil that she's now surrounded by. When she realises exactly what information Bael is looking for and what he plans to do with it suddenly her revenge doesn't seem quite as important as it did before and Lyre starts to realise that the cost may be too high.

I don't want to say much more about what happens in this novella but it's just as action packed and full of romance as you'd expect from a book in this series. Although the 1001 Dark Nights novellas are designed to work as standalone introductions to the authors I actually think this story will work far better for readers who are familiar with the Demonica Underworld books. There is a lot here that you wouldn't appreciate as much without familiarity with characters like Hawkyn, Azagoth and Lilliana and this also leads on to the next full length book in the series, Reaper, which will publish later this year. I'm such a huge fan of this world though so I'd highly recommend the entire Demonica series to anyone who loves paranormal romance.