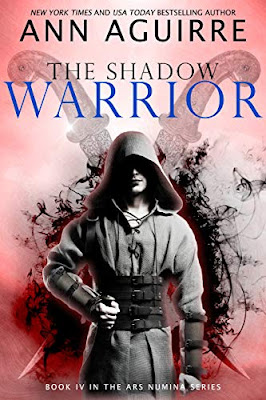 Molded since childhood to be the perfect weapon, Gavriel d’Alana (also known as Death’s Shadow) has devoted himself to serving Thalia Talfayen. The life of a Noxblade is lethal and lonely, and since the princess has no need of him, he secretly believes there’s no reason for him to live—and he should seek a glorious death—but that’s before he tangles with a tiger woman who unleashes his darkest desires.

Magda Versai has a reputation for being unattainable—no deep attachments, only discreet amusements. If she has her way, the pride will never learn of her private heartbreak, as she accepted her curse years ago. Now, she focuses on work, which is why she’s acting as Raff’s bodyguard while secretly hunting for Slay. The search leads Mags to team up with a Noxblade so belligerent that she can’t resisting baiting him.

She’s the steel, he’s the flint, and the sparks they strike together might kindle a fire that could warm them for a lifetime, if they don’t kill each other first…

Review:
Gavriel was trained from childhood to be a lethal assassin, as a Noxblade his sworn duty has been to protect Princess Thalia and it's a job he's been proud to do. But as the Princess makes a marriage alliance with wolf and Pine Ridge alpha Raff he believes his duty as her bodyguard is over and is looking for a new way to serve. Magda has been working as Raff's personal protection but her main reason for travelling to the Eldritch lands is her hunt for former pack member Slay. Nobody knows if Slay willingly became traitor and betrayed the pack or whether he's been taken hostage but Mags is determined to hunt him down and find out the truth. Gavriel agrees to be her guide and help Mags with her hunt but he has very little idea what he's just signed himself up for and the sparks are about to fly.

Events at the beginning of The Shadow Warrior run alongside ones in The Wolf Lord and it was interesting to see how Gavriel reacted to Raff and Thalia's growing closeness, he had always considered himself in love with the princess but it doesn't take him that long to realise it was just admiration. This story gives us some great development in the ongoing story arc and shows that their enemies are only getting started on their campaign designed to start a war. Gavriel and Mags have a part to play in deescalating certain situations but there is far more going on behind the scenes that we're only starting to uncover.

Although the book has plenty of action and a lot going on the best thing by far was the romance and the slow build between Mags and Gavriel. Raised to be a top assassin Gavriel didn't have anything like a normal childhood and he's already lost the warriors he was closest to. He can think of 100 ways to kill someone but he finds it very difficult to make small talk so he came across as quite abrupt in previous stories but he's actually pretty sweet once you get to know him. What I really loved was that Mags was the dominant one in their relationship, Gavriel will fight alongside her when they're in danger but when it comes to the bedroom he prefers to let her take the lead and he likes a little pain to go along with his pleasure.

It's very rare to find a romance hero who isn't a bossy alpha male so Gavriel was a really refreshing change. I also loved the way Mags introduces him to Dominance and submission, she's very open and upfront about her own sexuality and desires and she slowly earns Gavriel's trust well before they start any kind of kinky play. There was no diving in at the deep end, it was all about discovering what worked for both of them and sharing their deepest fantasies. They were perfectly matched in so many ways even though both of them were incredibly wary of relationships.

The Shadow Warrior also set things up perfectly for the next book, The Warrior Priest, and I can't wait to get to know Callum better.