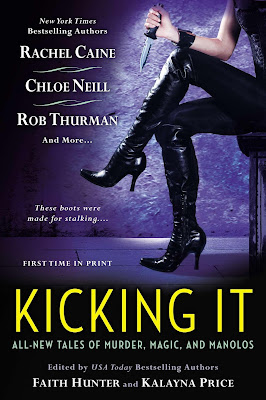 Boot-loving Cadogan vampire Lindsey must team up with off-again, on-again vampire partner Luc when a woman from her past is targeted by supernaturals in New York Times bestselling author Chloe Neill’s all-new adventure.

Taking kick-ass urban fantasy literally, USA Today bestselling authors Kalayna Price and Faith Hunter bring together the best of the genre to once again prove when you’re fighting supernatural forces, it helps to keep your feet on the ground.

Review:
The great thing about anthologies is that they often give you a chance to try out a whole bunch of new authors. Kicking It has some big name authors from the urban fantasy genre so although I was most excited to read Chloe Neill and Kalayna Price's stories it was great to get to try some other new-to-me series too.

I'll talk briefly about each story below but my overall opinion of this book is good. With any anthology there will always be some stories that you enjoy more than others but this collection definitely contains more hits than misses and even the ones I didn't love were well written, I just believe I'd have enjoyed them more if I was already familiar with the series they belong to.

In Forked Tongues Holly & Andy are facing off against a demon who is riling up the general public against witches. It's already led to one murder and and Holly is the demon's latest target so they need to work fast if they want their lives to get back to normal. This is the second short story that I've read about this couple and I'm really enjoying getting to know them both, I love that Holly is a resurrection witch and that Andy is someone she brought back from the dead but I really must read their first story so I can find out how they first met. I actually think it's a shame Rachel Caine hasn't written a full length book about these two because they're such interesting characters.

I believe Stolen Goods is a stand alone story but it would make a great start to a series so I'd definitely read more if the author decided to expand on it. It's an action packed story starring a thief and a master craftsman who is an expert at making weapons. He has something she wants but she'll only get to keep it if she helps him pull of the heist to end all heists.

The Girl With No Name by Chris Marie Green: 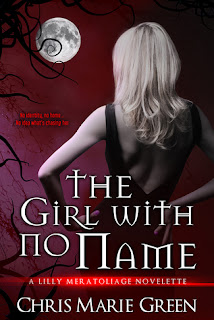 The Girl With No Name features a character from Chris Marie Green's Vampire Babylon series and is about someone who has completely lost her memory. Imagine waking up in a strange room with no idea how you got there, or even who you are, and then trying to figure out how you got there. While this story did make me curious enough to add the first book to my to read mountain I do think I'd have enjoyed this more if I was already familiar with the world.

I feel a bit ashamed to admit I've never read the Jane Yellowrock series, its one I've heard great things about and have been meaning to read forever so now that I've enjoyed two stories set in this world I don't really have any more excuses. This story focuses on twin sisters Cia and Liz, both are witches who I believe have been side characters in the main series. When they are contacted by one of the mean kids who used to bully them in school they are reluctant to help her in any way but, once they realise her mother is missing and that blood magic may have been involved in the disappearance, they feel like they have to step in. There is only a brief appearance from Jane but I like this world and I really want to spend more time in it.

I honestly can't believe it's taken me this long to discover High Stakes, I absolutely love the Chicagoland Vampires series and really like both Luc and Lindsay so I'm not sure how I missed this story about them being published. I didn't even realise Chloe Neill had a story in this anthology until I picked it up to start reading (observant I am not LOL). Anyway, this was by far my favourite story in Kicking It, it was great to learn more about Lindsay's past before she moved to Chicago and it answered some questions about why she has always been so determined to keep Luc at arm's length. They're such a cute couple and I liked that Luc always had her back even when she tried to push him away. Their relationship seems much more solid by the end of the story but I'd still love to read at least another short story about them to learn more about Luc's background and just to spend more time with them. This was a lovely addition to the Chicagoland world.

The Parlor by Lucienne Diver:

Latter-Day Olympians Series:
Trickster Blood (Short Story)
Bad Blood
Crazy in the Blood
The Parlor (Short Story in the Kicking It Anthology)
Rise of the Blood
Battle for the Blood
Blood Hunt

I've not read anything by Lucienne Diver before but The Parlor definitely left me wanting to read more from the Latter-Day Olympians series. The story is about P.I. Tori who has been asked to run surveillance on a suspected cheating husband. It should be a pretty boring job but when the husband goes into a gambling den called The Parlor and doesn't come back out things get much more interesting. With hints of Greek mythology and ancient Gods roaming around in the current day this series ticks a lot of my boxes and I can't wait to carry on reading it.

Christina Henry's Black Wings series is another one that's been on my radar for years but I haven't quite got around to reading it yet. Although I'm not familiar with this world I still enjoyed the story and I'm now even more curious about the rest of the series. The main character Madeline has been sent to track down a pair of red shoes but when you're given a mission by Lucifer you know things are going to get complicated and these aren't any ordinary shoes. I liked Madeline and this was a fun read.

Trickster Series:
Snakeskin (Short Story in the Kicking It anthology)
Trick of the Light
The Grimrose Path

Snakeskin is the introduction to Rob Thurman's Trickster series and it added yet another series to my to read mountain! Main character Trixa runs a bar but also makes very good money on the side by taking on special projects for clients. I was completely hooked by this story, it totally defines the phrase "be careful what you wish for" and I loved the way Trixa went about granting her latest client's request. Sometimes the bad guys really do get what they deserve!

The main reason I actually picked up this anthology is because I'm currently rereading the first few Alex Craft books so that I can finally catch up with the latest releases. Ruby Red introduces us to new characters Briar and Derrick, both members of the MCIB, Magical Crimes Investigation Bureau. They were supposed to be on vacation but get called back into work thanks to the outbreak of a mysterious magical virus. These characters haven't been in the first two books in the Alex Craft series but I believe they have a role to play in the third book Grave Memory (it's been a long time since I first read that book so I really can't remember now!). I liked them both so hope that they'll become series regulars and that we'll see a lot more of them in the future.