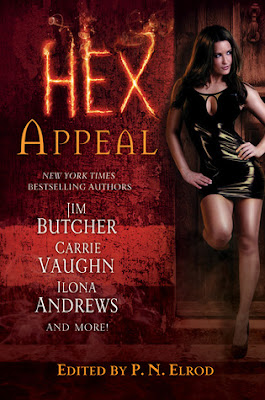 Fall under the intoxicating spell of their hex appeal . . .

In the magical world that lies hidden beneath our own, witches and conjurers play deadly games. They know just the right spell to kill a man with one kiss—or raise him back again. And they’re not afraid to exact sweet revenge on those who dare to cross them. But what if you’re the unlucky soul who falls victim to a conjurer’s curse? And if you had the power to cast a magic spell of your own, would you use it?

In this bewitching collection, nine of today’s hottest paranormal authors tell all-new, otherworldly tales. Spellbinding stories featuring bigfoot, albino vampires, professional wizards, resurrected boyfriends and even a sex droid from the twenty-third century named Silicon Lily. But as our conjurers are about to discover, it’s all fun and games until someone gets hexed. And sometimes, even the best spun spells can lead to complete and utter mayhem.

Includes:
(Click on the author's name to visit their website)
Retribution Clause by Ilona Andrews
Bigfoot on Campus by Jim Butcher
Holly’s Balm by Rachel Caine
Snow Job by Carole Nelson Douglas
Outside The Box by P. N. Elrod
How Do You Feel? by Simon R. Green
There Will Be Demons by Lori Handeland
Cherry Kisses by Erica Hayes
The Arcane Art of Misdirection by Carrie Vaughn

This is set in the same world as the Kate Daniels series but we don't get to see any of the characters we already know and love, we do get to meet Saiman's cousin though so there is a link there. I really loved Adam, as much as I find Saiman's constant body swapping amusing it is kind of creepy so it was interesting to see how different Adam is and how comfortable he is in his own skin. Adam and his partner, Siroun, work as insurance adjusters which sounds boring on the surface but in reality means they are charged with investigating any suspicious deaths among their clients. In the case of murder victims it is up to them to dispense justice to their killers. Although this is a farily short story there is a mystery to solve and I enjoyed getting to meet these characters and explore this world further. There is definitely some great potential for these two and I'd love to read more stories about them in the future.

Jim Butcher's Dresden Files series has been on my radar for a long time now but for some reason I've never got around to starting it. Even though this story fits into the timeline after book 11 I still found it fairly easy to dive into and I enjoyed meeting the main character. Harry has been hired by his friend, who happens to be bigfoot, to protect his teenage son. The son is at university and his father is convinced he is in danger. Harry gets much more than he bargains for when he arrives on the scene and the story starts with him getting arrested at an orgy! This was a really fun story to read and it's definitely made me even more keen to start the rest of the series.

While I liked this story it didn't quite manage to capture my attention as much as the first two did. I believe that the two main characters, Holly and Andy, have appeared in a previous short story but I don't think this is linked to any of the author's other series. Holly is a resurrection witch and Andy is someone that she brought back to life which I thought was a really unusual concept. In this story Holly is asked to help the police investigate a murder scene, one that is very similar to a previous case she worked on - right down to having the exact same victim! Yes, that's right, someone is resurrecting the victims so that they can murder them all over again, horrifying thought isn't it? The couple were likeable and the story was interesting but I found it a little too easy to guess who the bad guy was, I guess that's the hazard of short stories though - there isn't much time to introduce a lot of red herrings.

Delilah is a paranormal investigator hired by the owner of a local casino to get to the bottom of some mysterious occurrences at his hotel. These is obviously a lot of history between them & I think I missed a lot of the subtleties because I'm unfamiliar with the series. I had a similar problem with the world building - I liked the idea of old movie stars being bought back to life although I'm still confused about how that happens. It's intrigued me enough that I want to try the first full length novel though & I have a feeling I would enjoy this story more (& rate it higher!) if I read it at the correct point in the series.

Outside the Box - P.N. Elrod

Marsha is a witch whose job, along with her vampire partner Ellinghaus, is to make sure all newly born vampires are properly registered. What should have been a fairly straightforward case gets a lot more complicated when they discover that the newly made vampire is a young girl whose disappearance a week ago has been highly publicised. This was a fun story, I'm not sure if it's part of a series but I wouldn't mind reading more about these characters.

How do you Feel - Simon R. Green

I think this was just a bit too dark & gory for me & I really struggled to connect with the main character. It's about a zombie known as Dead Boy who was killed in a mugging 30 years ago. Ever since his death he has had very little feeling either physically or emotionally & is constantly chasing anything that will give him something, even pain is better than nothing. When someone hints that the mugging may not have been completely random Dead Boy goes looking for revenge.

There Will Be Demons - Lori Handeland

Phoenix Chronicles:
There Will Be Demons (Short Story in the Hex Appeal anthology)
Any Given Doomsday
Doomsday Can Wait
Apocalypse Happens
Chaos Bites

This story is part of the Phoenix Chronicles which is a series I hadn't heard of before but am definitely going to have to check out now. Summer is a fairy who works as a demon hunter & her latest case brings her a new partner, dhampir Jimmy. Jimmy is someone that Summer has dreamed about for centuries and she's not quite sure how to react to meeting him for the first time.

Really liked this one - that's another series added to my wish list! Lena is a con artist, she's not quite a witch but she does have some magical abilities. When she's offered a job to track down a demon amulet it means a trip to hell, but the promised payment makes the risk worthwhile. Unfortunately she has competition in the form of Ethan, someone she has history with and a lot of unresolved feelings for. When they get to hell they realise they have fallen into a trap & it looks like they'll have to learn to work together if they want to survive.

How does a magician cheat at cards? That's something black jack dealer Julie is about to find out when someone at her table beats all the odds to win every hand. With the help of Odysseus Grant Julie is determined to find out exactly what is going on in her casino. I enjoyed this one, apparently Odysseus is a character who appears in the Kitty Norville series but I didn't have a problem following the story even though I'm unfamiliar with his character. I would be happy to read more about these characters in the future though and I already have this series on my to read pile.