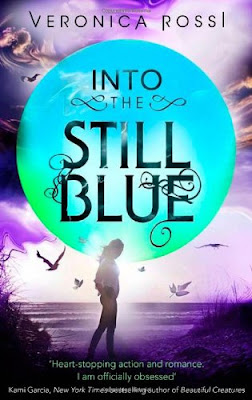 Worlds kept them apart. Destiny brought them together.

Outside the dome of Reverie, Aria and Perry are struggling to keep their people from tearing each other apart. Their situation is desperate and, with the Aether storms worsening, time is running out for them to rescue Cinder from Hess and Sable.

Cinder is both the key to unlock the Still Blue and their only hope for survival, so Aria and Perry assemble an unlikely team to attempt a daring rescue mission. They know that in a dying world, the bond of friendship is what matters most.

In this final book in the Under the Never Sky trilogy, the stakes are raised to the absolute limit and Aria's love story is brought to an unforgettable close.

Review:
I'm always nervous when it comes to reading the final book in a trilogy, it's very hard not to have high expectations with series you love and so many times I feel like the ending is a let down so I was wary going into this one. Thankfully my worried were unfounded as Veronica Rossi finished Perry and Aria's story on a high note.

I don't want to say too much about what happens in this book but it is much faster paced and more action packed than the previous two. Again we see Perry and Aria separated for large chunks of the story but the time they do spend together more than makes up for it. They are one of my favourite YA couples and I think they make a brilliant team. I also loved spending time with Aria and Roar, they have such a fantastic friendship and I love that bond between them. I think the most special thing about it is that the author never tries to turn it into a love connection, they care for each other but there isn't even a hint of romance. How many boy/girl friendships can you think of in YA stories that are like that? I actually can't name a single one apart from theirs off the top of my head which shows how unique it really is.

The characters are what made me love this series, there are people I love and ones that I hate but so many of them bring out strong emotions in me. I'll warn you now that not everyone survives the story and there are moments when you'll definitely want to have tissues on hand but no matter how dire the circumstances seem I always felt like there was hope. I enjoyed seeing Perry and Aria working together to unite their people against a common enemy and I loved seeing certain people get what they deserved. Sometimes the enemy of your enemy is your friend - until they're back to being your enemy again - and there are some very surprising alliances in this book.

Into the Still Blue is a strong ending to a fantastic series and I'm sure it's one I'll be rereading again in the future. In the meantime anything new written by Veronica Rossi will be jumping straight to the top of my wish list.