Review: Over the Top - Rebecca Zanetti 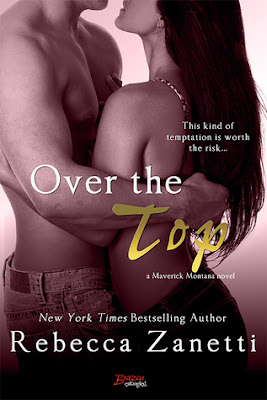 Dawn Freeze had a huge crush on Hawk Rain for years, and the entire town knows it. It's understandable―the man is total hotness. That tall, lean body. Intense dark eyes. And always one foot out the door. Now he's on leave for exactly one week. And this time, he's made it crystal clear that he only wants one thing. Her.

Hawk's been fighting his attraction to Dawn for as long as he can remember. She's his best friend's little sister, and that means hands-off. Except now she's all grown up, and her sweet sexiness is exactly what he craves. But just as Hawk allows himself one mindblowingly intense night with Dawn, he learns that everyone he loves is in danger. Especially her.

And the only way to protect Dawn is to push her away . . .

Maverick Montana Series:
Against the Wall
Under the Covers
Rising Assets
Over the Top

Review:
Dawn has been in love with her brother's best friend for as long as she can remember and half the town knows how she feels even if Hawk has never done anything to encourage her. Hawk has secretly wanted Dawn for years but he's sure her brothers would never approve of them as a couple. His job is dangerous and every time he leaves town there's a risk he might never come back so the last thing he wants is to leave Dawn broken hearted. He's tired of fighting his feelings though and she's becoming harder and harder to resist. After spending one amazing night together Hawk's job unexpectedly catches up with him and now everyone he cares about is in danger, including Dawn and her family. Can he keep her safe or will he lose her forever?

I've been dying to read Dawn and Hawk's story ever since they were introduced in the first book of the series. I had a feeling Hawk was going to be my favourite and I wasn't wrong, he's definitely a brilliant hero and Dawn's a lucky lady. This story was incredibly fun to read, a few of the town's busybodies have decided it's time for Dawn to land her man and they're not above meddling to get Hawk to admit his feelings for her. I spent a lot of time laughing at their antics and they're definitely not the usual tricks you'd expect from a couple of little old ladies. I also loved catching up with Dawn's brothers and their wives, I've enjoyed spending time with this family and it's great to see how far everyone has come since the beginning of the series.

Unfortunately I don't think the romance was as well developed as it could have been, this seemed like a fairly short book and as much as I enjoyed the crazy antics as well as the suspense side to the story I think the relationship development between Dawn and Hawk suffered because it wasn't the main focus. Don't get me wrong - the sex was hot and there were a few really sweet moments between them but I had such high expectations for their book and I was slightly disappointed. This has still been a fun series though and it's one I'd recommend to people who enjoy small town romances. I love Rebecca Zanetti's writing and I'll definitely be checking out more books by her in the future.