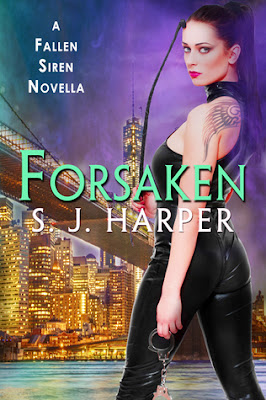 Join Agents Emma Monroe and Zack Armstrong
She protected him. He loved her.
They can trust one another with their lives, but what about their hearts?

Special Agent Emma Monroe is a Fallen Siren seeking redemption. Thousands of years ago, she was banished from Mount Olympus by Zeus and cursed by Demeter for failing to prevent the kidnapping of Persephone by Hades. Now she’s working for the FBI, seeking salvation while searching for and finding the missing. Her partner, Zack Armstrong, is a werewolf with a grievance of his own.

The former Black Ops sniper who once carried out a string of questionable assignments is atoning for his past. Ironically, Zack’s just discovered an important piece of his past has been magically wiped from his memory—an affair with Emma. It doesn’t matter she used the spell to save his life, that’s something he’ll never know. With trust eroded and love overshadowed by betrayal the only thing holding them together is the job.

When the son of multi-billionaire Roger Maitlan is kidnapped and his babysitter murdered in cold blood, Emma and Zack travel to New York to work the case. They go undercover, infiltrating a playground of private dungeons where those who are rich and powerful can live out fantasies without consequence. What they find is a conspiracy born of a twisted mind and fueled by greed. The clock is ticking. Will Zack and Emma be able to find the missing boy and their way back to one another?

Review:
Forsaken picks up the story right after the ending of Reckoning so things are pretty tense between Emma and Zack. It's not been long since Zack found out that Emma had messed with his memory and he's angry and hurt. It doesn't help that Emma can't explain her actions because she refuses to risk his life by telling him the truth. She is terrified he is going to walk away from her forever but at the same time she knows that is probably the safest option for him. They have to put their feelings to one side when the child of a well known billionaire is kidnapped though. The two are sent to New York to work the case and they know that the child's life is more important than any hurt feelings between them. Can Zack and Emma find a way to work together in spite of their issues or will a child suffer because of them?

I've really fallen in love with this series so I was incredibly excited to read Forsaken, after the way things ended in the previous book I was nervous about how things would be between Zack and Emma. It's hard because as a reader we can fully understand where they're both coming from. If I was in Zack's position I'm not sure I'd be able to forgive Emma's actions because he doesn't know her reasoning but obviously knowing what we do about Demeter and Emma's curse we can understand why she keeps the secret. There really isn't an easy answer to the issues between them and it's hard to see how much pain they're both in. I do love that they are able to put their problems to one side and get on with their job though, of course there is tension between them and they still have that spike of attraction that isn't going anywhere but they will do whatever it takes to find the missing child and I respect them both for that. It was nice to see them starting to work things out too, they still have a long way to go but we're left with a feeling of hope that Zack has started to figure out that something is going on that Emma can't talk about.

This was a great addition to the series and I'm sure fans will love it. My only issue was that I wanted it to be longer, not because the story wasn't satisfying because it definitely was, but because I love this world and these characters and I wanted to spend more time with them! I can't wait to get my hands on the next instalment of the series!