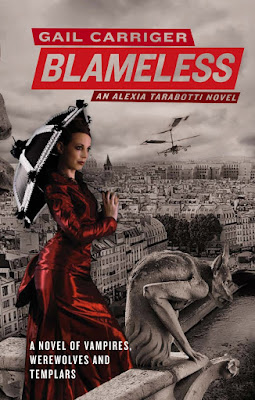 Quitting her husband's house and moving back in with her horrible family, Lady Alexia becomes the scandal of the London season.

Not only does Queen Victoria dismiss her from the Shadow Council, but the only person who can explain anything, Lord Akeldama, unexpectedly leaves town. To top it all off, Alexia is attacked by homicidal mechanical ladybugs - indicating, as only ladybugs can, the fact that all of London's vampires are now very much interested in seeing Alexia quite thoroughly dead.

While Lord Maccon elects to get progressively more inebriated and Professor Lyall desperately tries to hold the Woolsey werewolf pack together, Alexia flees England for Italy in search of the mysterious Templars. Only they know enough about the preternatural to explain her increasingly inconvenient condition, but they may be worse than the vampires and they're armed with pesto.

Review:
Please note that although this review is spoiler free for Blameless it will contain major spoilers for previous books in the series so look away now if you've not already read Soulless and Changeless.

The end of Changeless saw Alexia discover that she was pregnant then immediately get accused of infidelity by her husband Conall. She has now returned from Scotland and after Conall told her he never wanted to see her again she's had to resort to moving back in with her family. We've all seen just how badly her mother and stepsisters treated her before so having her move back home in disgrace hasn't improved their relationship at all, especially not when the whole of London is talking of her assumed indiscretion. Alexia is determined to find out more about the abilities of the Soulless so that she can clear her name but when it becomes clear that the vampires have decided to execute her she realises it might be time to leave London. She sets out to Italy in search of the Templars in the hope that they'll have the information she desperately needs but danger isn't far behind her and she's going to have to figure things out quickly if she wants to survive.

I was incredibly disappointed with Conall's behaviour at the end of the previous book, I can understand why he was sceptical because werewolves can't have children but surely the fact that his wife's touch turns him human should be enough to make him pause before accusing her of something so horrible. It was the fact that he didn't even speak to her that really annoyed me, she wasn't even given a chance to defend herself before he had her thrown out of the house and basically abandoned her. Alexia is rightly mad at her husband and even though she wants to prove to him that he's the father she isn't so sure she can forgive him for doubting her, something I couldn't blame her for in the slightest. I was hoping that Conall would come to his senses quite quickly but he spends the majority of the first half of the book drinking away his sorrows and feeling sorry for himself. Meanwhile Alexia is dealing with the shock of her pregnancy, the disapproving frowns wherever she goes and multiple attempts on her life thanks to the vampires.

The poor girl has a lot on her plate but she copes admirably and I was pleased that she takes action rather than sits around mooning. Alexia has always been a practical woman and that really shows here, she reaches out to a few trusted allies and before we know it she is on her way to Italy with Madame Lafoux and Floote for company. As I'm sure anyone who is familiar with this series would expect plenty of hijinx ensue and Alexia is in for quite an adventure as she crosses Europe. One thing I was really pleased with is that Conall's second, Professor Lyall, believes Alexia is innocent. He tries talking sense into his alpha but the man is stubborn as hell and he's so drunk on formaldehyde that it takes quite a while for the truth to sink in.

I have to admit that as much as I still love Alexia and I enjoyed seeing her adventures I'm still annoyed at Conall. He takes far too long to come to his senses and when he finally did go after Alexia it was a case of too little too late for me. I expected him to do some major grovelling and for Alexia to make him work at earning her forgiveness so I was angry that she took him back so quickly and I'm no longer feeling quite so confident in their relationship. I'm hoping that we will see him really make amends to her in the next book, he's made a start but he has a long way to go in my eyes before I'll forgive him completely.

As much as Conall irritated me I still really enjoyed the rest of the story, there are lots of crazy antics, the story moved at a fast pace and this whole series really keeps me on my toes wondering what could possibly happen next. I'm very curious to see how Alexia copes with impending motherhood, she seemed quite cold when she thought about the baby in the beginning but by the end of the story it is obvious she has already become quite attached to the "infant-inconvenience" and I think it'll be fun to see her as a mother. Whatever happens I think the baby is going to make life interesting for the whole pack and it's sure to have a knock on effect when it comes to the whole supernatural community so I'm definitely looking forward to Heartless.