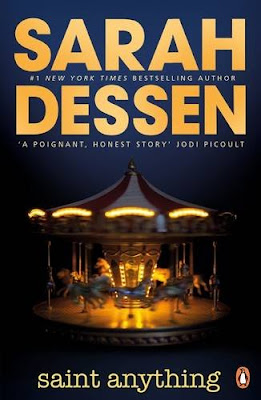 Peyton, Sydney's brother, has always been the star of the family, receiving all the attention and, lately, concern. His reckless behaviour culminates in a shock accident and a jail sentence which casts Sydney adrift, searching for her place in the family and the world.

Enter the warm, chaotic Chatham family who accept Sydney without question. It's here that she meets Mac: gentle, watchful and protective, who makes Sydney feel seen, really seen, for the first time.

Review:
I don't tend to read a lot of YA contemporary romance these days but I've heard so many amazing things about author Sarah Dessen that I was kind of embarrassed to admit I'd not read any of her books. So when I was offered a review copy of Saint Anything I knew I had to give it a try and now I can really understand what all the fuss was about.

Sydney has been living in the shadow of her perfect older brother Peyton for her whole life, even when Peyton started going off the rails and ended up in juvie he was the centre of their family. Sydney's whole life was turned upside down because of his behaviour but her parents hardly even notice her and she feels lost and completely alone. Starting at a new school she meets Layla and is introduced to the whole Chatham family. Layla's family allow Sydney to be completely herself, they actually seem to notice that she exists and she realises just how much she has been missing at home.

My heart broke for Sydney, she has been through so much and she feels such terrible guilt for what her brother did but until she meets Layla and her family she's never had anyone who really seemed to care about her feelings. I was so angry with her parents, her father was pretty absent but her mother is so focused on Peyton that she forgets that Sydney needs her too. I could understand her wanting to stick by her son but the way she completely ignored Sydney's feelings was pretty hard to stomach and I wanted to shake some sense into her. Sydney is so confused, she has nobody to talk to about what happened and she's beating herself up for something that she didn't do. It was great to see Layla and her family take her under their wing and I absolutely loved Layla's older brother Mac.

There is a really sweet romance that develops between Sydney and Mac but the focus of the story is definitely Sydney and her complicated relationship with her parents and her brother. It was great to see her finally take a stand and tell her family what she was going through and I was pleased that her parents eventually took notice. This story is all about family and finding your place, it's also about friendship and first love and so much more. It's a beautiful book and it's definitely made me realise I need to start working my way through Sarah Dessen's back list.