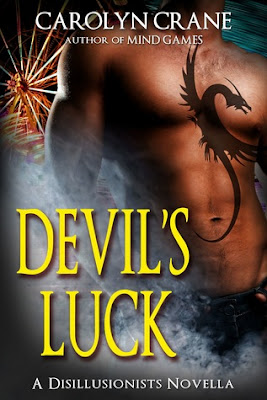 A standalone novella from the Disillusionists world (32K words)
This new edition contains an epilogue.

THERE’S A THIN LINE BETWEEN LOVE AND DOOM.

No wager is too outrageous for Simon Fitzgerald, the most reckless of the Disillusionists. His dark secrets drive him to take increasingly extreme risks, but he’s never lived so quite so dangerously as when he hooks up with Midcity’s most powerful prognosticator.

Fawna Brady is tormented by the destinies she sees for those around her. To Fawna, knowledge of the future is a cage she’d do anything to escape. She’s stunned to discover a taste of the freedom for which she yearns at the side of Simon, the one person in the world who despises everything she is, everything she stands for.

Simon’s defiant attitude toward destiny captivates Fawna, but will her love destroy him? And will Simon rush headlong into the delicious doom she offers?

Review:
Simon was one of my favourite characters throughout the Disillusionists trilogy so I was really excited to find out that Carolyn Crane had given him his own story. When I first saw he was being paired up with Fawna I wasn't convinced though, the two of them are so different that I wasn't sure what they would really see in each other but I actually think that's what made them work so well.

We already know how reckless Simon is, he is constantly taking risks and putting himself in harm's way but we never really understood why so it was great to get a bit of his back story. I'm not going to go into details but it was surprisingly emotional. Fawna is a character we didn't know much about and to be honest I'd still like to learn more about where she spent her missing years but I found myself really liking her in this story. She tries so hard not to use her gift of seeing the future but it's not easy to resist and it was interesting to see her fighting herself not to check the fate of people she encountered.

Simon and Fawna start as enemies, Simon has a very good reason for not wanting to know the future and Fawna is unable to stop looking at it so they're more natural enemies than lovers. Their differences actually work for them though, they have such a completely different outlook on things and Simon was great at teaching Fawna to live in the present and just enjoy life rather than worry about what fate might be about to throw at her later. Things move fairly quickly between then and as much as I would have loved a longer story with them spending more time getting to know each other I still really enjoyed this novella.

Devil's Luck was a nice addition to the Disillusionists trilogy & I liked it much more than the first novella starring Sophia. There are actually a few other characters who I would love to read stories about so it would be great if Carolyn Crane decided to give us a story about Shelby, Carter or any of the others but it's been such a long time since this was published that I think it's unlikely. I'll definitely be keeping an eye out for her future publications though.