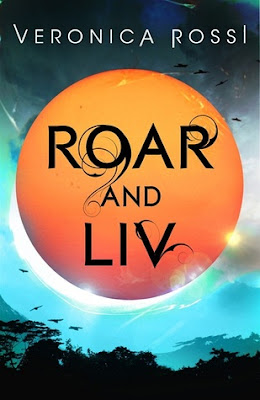 Before Perry and Aria, there was Roar and Liv.

After a childhood spent wandering the borderlands, Roar finally feels like he has a home with the Tides. His best friend Perry is like a brother to him, and Perry's sister, Liv, is the love of his life. But Perry and Liv's unpredictable older brother, Vale, is the Blood Lord of the Tides, and he has never looked kindly on Roar and Liv's union. Normally, Roar couldn't care less about Vale's opinion. But with food running low and conditions worsening every day, Vale's leadership is more vital—and more brutal—than ever. Desperate to protect his tribe, Vale makes a decision that will shatter the life Roar knew and change the fate of the Tides forever.

Review:
Although Roar and Liv is technically a prequel to Under the Never Sky and can be read by people who aren't familiar with the series I'd actually recommend reading the book first because I think you'll get more out of the novella if you're familiar with the characters. In fact, for the purpose of this review I'm actually going to assume that you have already read Under the Never Sky so be aware that there will be (hopefully minor) spoilers if you haven't.

I loved Roar's character from the minute he was introduced in Under the Never Sky so of course I jumped at the chance to read a story from his point of view, especially because it meant we would finally get the chance to meet the love of his life Liv. We already knew how much he cared about her and how desperate he has been to try and find her after she ran away but it was brilliant to get a glimpse into the beginning of their relationship and see just how great they are together first hand. We also get to see more of Perry's childhood and watch the three friends grow up together which was a really nice addition to the series.

If you've read the first book then there aren't really any surprises in Roar and Liv's story, we already knew how things would pan out for them but I still really enjoyed getting to know Liv's character and filling in the missing details about what happened with her on the journey to the Northern Blood Lord. If you're a fan of the series then this novella is well worth reading and I'm glad I took a chance and bought it.