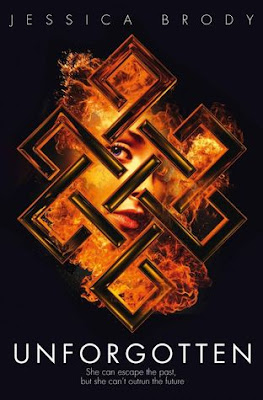 Can you ever really be safe from the horrors of the past?

Seraphina and her boyfriend Zen are on the run and in hiding from the scientists who created her.

But will they be able to stay hidden as Zen falls prey to a mysterious illness and Seraphina's creators develop a dangerous new weapon?

Now Seraphina's only hope of saving Zen and defeating the company that made her is a secret buried deep within her mind.

A secret that those hunting her will kill to protect.

Review:
Unforgotten is the second book in Jessica Brody's Unremembered trilogy and picks up a couple of months after the ending of the first book. Seraphina and Zen have fled back to 1609 to escape the Diotech scientists and if they can just keep their heads down there is no way they can ever be traced. Unfortunately while Zen has settled in quite quickly Seraphina is struggling and the villagers look at her with suspicion in their eyes. When Zen becomes ill and an accident causes Seraphina to be accused of witchcraft she suddenly finds herself in more danger than ever before and she may just have to team up with the enemy if she wants to save the boy she loves.

I really enjoyed Unremembered so I was looking forward to continuing the series and seeing what happened to Seraphina next. I really enjoyed the beginning of the book, it was great to see Seraphina and Zen so happy together and I was enjoying the glimpse into the past through their eyes, everything is so different to what they were used to but neither of them cared about missing modern conveniences as long as they were together. Then Zen got ill and things started going horribly wrong, Seraphina's actions caused a record of her existence to be created which meant Diotech were able to track her down and suddenly Kaelen is on the scene. Kaelen was created by Diotech just like Seraphina and he has all of her abilities and then some so Seraphina is in deep trouble. There is something hidden deep in her memory that Diotech wants and when Kaelen promises to give Seraphina the cure Zen desperately needs she has no choice but to travel with him into the future while she tries to unlock her memories.

I hate to say it but I was disappointed by Unforgotten, it isn't a bad book and I definitely still want to finish the series but for me this just didn't quite live up to the potential of the first story. I think I was just disappointed that Seraphina and Zen were apart for so much of the story, after everything they'd been through together I wanted to see them continuing to work as a team. I definitely wasn't happy that it seemed like a convenient way to introduce Kaelen as a potential love interest, I would have been fine with him as an enemy or a potential ally but I didn't want or need a love triangle in this series. Come on authors, how many times do we have to read these trilogies where the main plot point is a love triangle? I'm so sick to death of that trope that I'm actually bored of complaining about it. It's definitely makes me wary of picking up new series and I hate that.

So if I wasn't so annoyed at the triangle I probably would have enjoyed this more, there was plenty of action, some intriguing plot twists and it was interesting to see the future the way Jessica Brody has imagined it. I'm invested in these characters enough that I want to see how things resolve themselves so I will be picking up the final book but I am now more wary about reading it and my expectations have definitely been lowered. Let's just hope that the series can end on the high note that it started with.