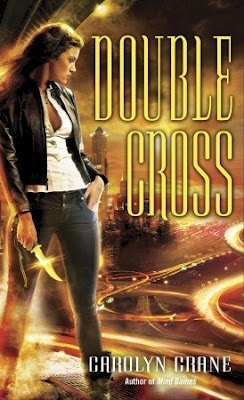 Some secrets come back to haunt. Others come to kill.

Justine Jones lived her life as a fearful hypochondriac until she was lured into the web of a mysterious mastermind named Packard, who gifts her with extraordinary mental powers - dooming her to fight Midcity's shadowy war on paranormal crime in order to find the peace she so desperately craves.

But now serial killers with unheard-of skills are terrorising the most powerful beings in Midcity, including mastermind Packard and his oldest friend and worst enemy, Otto Sanchez, who has the ability to bend matter itself to his will.

As the body count grows, Justne faces a crisis of conscience as she tests the limits of her new powers and faces an impossible choice between two flawed but brilliant men - one on a journey of redemption, the other descending into a pit of moral depravity.

Review:
After having mixed feelings about Mind Games I was a little nervous about picking up Double Cross but at the same time I was incredibly intrigued by the Disillusionists and I wanted to see how things played out for Justine. I have to admit I came close to DNFing this in the first half, Justine's inner monologue was irritating me by the end of the first book and I was about ready to throw my kindle across the room by the middle of this one. I was just so incredibly frustrated that she hadn't seemed to learn anything from her relationship with Cubby and she was still clinging to Otto because he was what she considered the perfect boyfriend to be. It is so completely obvious to everyone that there is a connection between her and Packard, he's the one she is constantly thinking about, he's the one she sparks off of and he's the one who knows not only what she wants but also what she needs. I get why she finds it hard to trust him, honestly I do, especially after the way he tricked her in the first book, but at the same time I can't help but root for him.

Anyway, I came very close to giving up on this book but I'm so glad that I didn't because the last third of the book was everything I'd hoped it would be and then some. I can't really go into much detail without giving spoilers but I loved seeing Justine finally start to grow up. She starts to realise that everything isn't as black and white as she always thought it was and she actually starts to look at the reasoning behind both Packard and Otto's behaviour. Then you have the twist at the end that absolutely shocked the hell out of me, I never would have seen it coming and I absolutely HAVE to read Head Rush immediately to find out what the hell happens next.

I still think it was the side characters that stole the show in this book though. I adore the scenes with Packard, Shelby is someone I want to be friends with and Simon makes me laugh out loud constantly. The world of the Disillusionists is becoming more detailed, we get to find out more about the different kinds of abilities that HighCaps have and we see more of the history between Packard and Otto. There is a lot of bad blood between them but I don't trust Otto's version of events for a second and I think there is still a lot more to the story that we've yet to uncover. I have so many unanswered questions and I can't wait to get the answers.