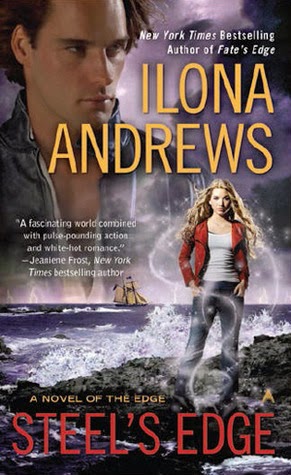 Charlotte de Ney is as noble as they come, a blueblood straight out of the Weird. But even though she possesses rare magical healing abilities, her life has been filled with nothing but pain. After her marriage crumbles, she flees to the Edge to build a new home for herself. But when Richard Mar is brought to her for treatment, Charlotte's life is turned upside down once again.

Richard is a swordsman without peer, the future head of his large and rambunctious Edger clan - and he's on a clandestine quest to wipe out slavers trafficking humans in the Weird. So when his presence leads his very dangerous enemies to Charlotte, she vows to help Richard destroy them. The slavers' operation, however, goes deeper than Richard knows, and even working together, he and Charlotte may not survive . . .

Review:
I have absolutely loved reading the Edge books and I'm actually kind of gutted that Steel's Edge was the last one but if you're going to end a series then what better way to end than with a high like this! These books grabbed my attention from the beginning but they really did get better and better and Steel's Edge was probably my favourite. Any time I pick up a book by Team Andrews I know I'm going to love it, they excel at kick butt heroines, fantastic character development, relationships with depth to them and of course off the charts action and you'll get all that and spades in this book.

When healer Charlotte gets her heart broken she decides to leave her life in the Weird behind her and she goes to the edge looking to start afresh. Life may be very different now but she's made a home for herself and enjoys using her healing abilities to help the locals, it's not easy to earn the trust of the edgers but she's made some very good friends and she's happy with her lot in life. All until one terrible day when a badly injured man is brought to her door, Charlotte is determined to save his life but his enemies aren't far behind him and suddenly she finds herself in the centre of a battle that could destroy everything she's worked so hard to build for herself. Now that Charlotte is involved she isn't going to sit back and meekly let her enemies get away with it so she sets out to rescue Richard and to claim her revenge.

As someone with incredible healing powers you wouldn't necessarily expect Charlotte to be a fighter but she's actually one of the most deadly heroines we've met in the series so far. She has a darkness inside her that she's constantly fighting but when her buttons are pushed she will push back hard. Imagine someone who has the ability to cure illnesses, now imagine that she knows exactly how the body works and that she can reverse her ability to actually make someone sick. Imagine the plague she could bring down on the heads of the people who have wronged her. Yes, Charlotte isn't someone you want to be on the bad side of and I loved how capable she is. She is actually a perfect match for Richard, they're both incredibly noble and always try to do the right thing, they protect the people they care about and their own safety is the last thing they think of. When Charlotte finds out more about the gang of human traffickers that Richard has been trying to take down she knows she has to do something to help him no matter what it costs her.

Steel's Edge is darker than the previous books, Charlotte and Richard are about to unleash a whole world of hurt on their enemies and I loved every minute of it. You'll still find the humour you'd expect from Ilona Andrews but there are also a lot of battles and a fair amount of blood and gore. These characters are fabulous, they have such depth to them that you'll feel like you met real, living people by the time you've finished the book. They're both messed up in different ways but they compliment each other perfectly and where one is weaker the other compensates for it. I loved seeing them work together and I really enjoyed the developing romance, here are two people who have spent their whole lives doing right by others and it was about time that they took something for themselves. It was great to catch up with some of the previous characters too and I just loved the whole story from beginning to end. I'm really happy that some characters from these books are now starting to appear in the Innkeeper's Chronicles which is another excellent series from this husband and wife team and I'm definitely going to continue auto-buying anything that they write in the future.