Review: On the Edge - Ilona Andrews 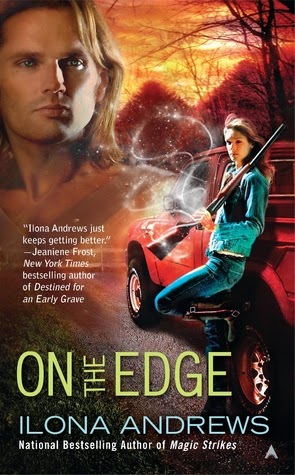 Rose Drayton lives on the Edge, between two worlds: on one side lies the Broken, a place where people shop at Wal-Mart and magic is nothing more than a fairy tale; on the other is the Weird, a realm where blueblood aristocrats rule and the strength of your magic can change your destiny. Only Edgers like Rose can easily travel between the worlds - but they never truly belong in either.

Rose thought that if she practised her magic, she could build a better life for herself. But things didn't turn out the way she'd planned, and now she works an off-the-books job in the Broken just to survive. Then Declan Camarine, a blueblood noble straight out of the deepest part of the Weird, comes into her life determined to have Rose (and her power).

But when a terrible danger invades the Edge - a flood of creatures hungry for magic - Declan and Rose must overcome their differences and work together to destroy them, or the beasts will devour the Edge and everyone in it . . .

Review:
It's no secret that I'm a huge fan of Ilona & Gordon Andrews, their Kate Daniels series is one of my all time favourites and I loved Burn for Me too so I decided it was high time for me to start working my way through their back list. I'd heard a lot of great things about the Edge books so I had high expectations but once again these authors have managed to blow me away with On the Edge.

I can't think of a single thing I didn't like about this book - I loved the world, I loved the characters, I enjoyed the heck out of the plot and I swooned more than a little over the romance. Rose lives in the Edge, a world between two worlds - the Broken which is basically the same as our world and a place where magic no longer exists and the Weird which is a magical place full of dangerous creatures and ruled by the blueblood nobility. The Edgers are stuck between the two very different cultures but never quite able to fit into either of them and Rose has it harder than most. After her mother's death and her father's abandonment Rose has been left raising her two younger brothers, Jack and George, and she struggles to make ends meet. She is grateful to have her grandmother there to help with babysitting but she refuses to be a burden and takes responsibility for earning the money they need to survive.

Rose is such a fantastic character, she is the kind of girl you can easily picture yourself being friends with - smart, witty, independent, caring and loyal. She is also more than capable of protecting herself and her family and you do not want to get on her bad side. I loved the relationship Rose has with her family, in fact family dynamics is something that Ilona Andrews always excels at, their grandmother is hilarious and wise and the two boys are just so adorably cute that I wanted to pull them out of the book and adopt them. I could write pages about why Jack and George are so fantastic but I'd rather let you have the fun of meeting them all for yourselves so you're going to have to read the book if you're curious.

Declan is an arrogant ass, there are no two ways about it, in fact there were times I could happily have punched him in the face but you know what? He's a loveable ass and I couldn't resist him! He's my favourite kind of brooding, secretive hero who you just know has a secret agenda and you're never quite sure what he's really up to but you can still tell his heart is in the right place. The relationship between him and Rose is combustible, they are able to wind each other up in seconds but at the same time you can feel the chemistry between them and you're left just screaming at the book begging for them to give into it. Rose makes assumptions about Declan and to be honest I can't blame her for that so I did find myself a little irritated at Declan for the way he played up to her expectations but when we learn the reasons for the secrets he keeps I found it fairly easy to forgive him. I think one of the things that really convinced me he was a great guy was the way he interacted with Jack and George, he went out of his way to reassure them and I loved seeing them all together as a kind of adopted family unit.

I haven't said much about the plot but since this review is already quite long I'm not going to go into much depth now either. What I will say is that the story is fast paced and completely grips you from the very beginning and it's the kind of story you never want to end. I was kind of sad when I found out each book in the series is about a different couple until I realised that the second book, Bayou Moon, is William's story and now I'm just desperate to start reading it. I'm so relieved that I already own the entire series because I'm definitely feeling a binge read coming on.