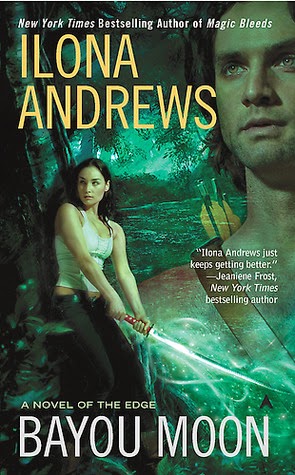 Cerise Mar and her unruly clan are cash poor but land rich, claiming a large swath of the Mire, the Edge swamplands between the state of Louisiana and the Weird. When her parents vanish, her clan's long-time rivals are suspect number one.

But all is not as it seems. Two nations of the Weird are waging a cold war fought by feint and espionage, and their conflict is about to spill over into the Edge - and Cerise's life. William, a changeling soldier who'd left behind the politics of the Weird, has been forced back into service to track down a rival nation's spymaster.

When William's and Cerise's missions lead them to cross paths, sparks fly - but they'll have to work together if they want to succeed . . . and survive.

Review:
I'm a total Kate Daniels fan girl but for some reason it's taken me a long time to get around to reading Ilona & Gordon Andrews' Edge series. I have no excuses for why that is and the only reason I'm glad I waited is that the entire series is already in my hands just waiting for me to finish devouring it. I expect this review is going to turn into gushing fan girl praise of this couple and their writing, they always create such brilliant and interesting worlds and they populate them with the best characters too. They excel at writing strong female heroines who are capable of kicking arse and standing on their own two feet, and I don't think I've come across one of their heroes who hasn't made me swoon.

We were introduced to William in On the Edge so I was already half in love with his character, he's just such a sweet guy and learning about his upbringing was heartbreaking. He's never had a family of his own or much of a childhood even and it wasn't until he met Rose and her brothers that he realised what he had been missing. William dreams of having a family but he doesn't feel it is something he deserves or that he'll ever be able to have so he tries to put a brave face on things and lock that dream away. William meets Cerise when he is sent on a mission for the Mirror, he is on the hunt for an old enemy and determined to make him pay for the crimes he has committed but it looks like Cerise and her family may hold the key to finding him.

Cerise and her family are just trying to survive, we've already seen how difficult life is in the Edge but for the Mars it is worse than normal. They come from an old Edge family and have a large amount of land but they have a lot of mouths to feed and very little in the way of income. Cerise has taken on the burden of trying to look after her family since her parents disappeared but it isn't easy and things are made even harder by an ongoing feud they have with another local family. Cerise is struggling to keep their heads above water but she's determined and there is no way she's going to give up without a fight so her enemies better watch out.

I loved the romance between Cerise and William, this series is far more focused on the action and the world building than the romance which is something I love about it but I still enjoyed the slow burn between them and the way they gradually come to trust in each other. Both have reasons to be wary but their temporary alliance soon becomes something much more important. I can't believe I haven't even mentioned Cerise's family yet! Another thing the Andrews' excel at is creating eccentric family members and really strong family dynamics. We are introduced to some great secondary characters here and I wanted to spend more time with all of them which just shows how much fun they are.

Bayou Moon is full of action, we get to learn a lot more about the world than we did in the first book and we find out more about the Weird politics and how that effects the Edgers. I was hoping that Rose and Declan would make more of an appearance in this story but we do get to catch up with them towards the end and it was nice to see how they, along with Jack and George, are getting on. This series is fast becoming another favourite of mine and I can't wait to see what happens in Kaldar's story.