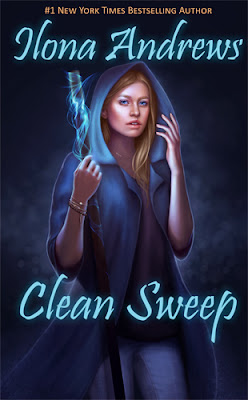 On the outside, Dina Demille is the epitome of normal. She runs a quaint Victorian Bed and Breakfast in a small Texas town, owns a Shih Tzu named Beast, and is a perfect neighbor, whose biggest problem should be what to serve her guests for breakfast. But Dina is . . . different: Her broom is a deadly weapon; her Inn is magic and thinks for itself. Meant to be a lodging for otherworldly visitors, the only permanent guest is a retired Galactic aristocrat who can’t leave the grounds because she’s responsible for the deaths of millions and someone might shoot her on sight. Under the circumstances, "normal" is a bit of a stretch for Dina.

And now, something with wicked claws and deepwater teeth has begun to hunt at night . . . Feeling responsible for her neighbors, Dina decides to get involved. Before long, she has to juggle dealing with the annoyingly attractive, ex-military, new neighbor, Sean Evans—an alpha-strain werewolf—and the equally arresting cosmic vampire soldier, Arland, while trying to keep her inn and its guests safe. But the enemy she’s facing is unlike anything she’s ever encountered before. It’s smart, vicious, and lethal, and putting herself between this creature and her neighbors might just cost her everything.

Review:
Clean Sweep was originally published as a free serialised novel on the Ilona Andrews website, I hated the idea of having to wait between instalments so I decided to hold off until the story was complete before reading it. When the authors were looking for beta readers to help edit the story before it was published I jumped at the chance of helping and I feel it's only fair to point that out even though I've tried very hard not to let that effect the way my review has been written. If you look closely you'll spot my name in the acknowledgements but even though I received a free ebook from the author I loved it so much that I also purchased a print copy to sit on my bookshelves.


Anyway, to get back to my review I have to tell you that I'm a huge fan of Ilona Andrews and their Kate Daniels series, they have become an auto buy author for me and Clean Sweep just helped to confirm the reason for that. They really do create such fantastic and unique worlds and I adore all of their characters, the fact that they treat us to strong heroines and alpha heroes who respect women and never step over the line into a-hole territory just seals the deal.

This story may have vampires and werewolves but it's far from your normal paranormal affair and you will also be treated to alien worlds and unusual races - the scope for future adventures in this world is just astounding! Dina is an Innkeeper, part of a magical race who offers safe haven to intergalactic travellers who are visiting foreign realms. She has an almost symbiotic relationship with the Inn she runs, the house protects her and she is able to draw from it's strength but without her keeping the Inn would wither away and die. Innkeepers have a duty of care to their guests and will do anything in their power to keep them safe but they are supposed to remain neutral when it comes to anything outside of their territory. Dina finds herself unable to sit back and do nothing when something starts attacking people in her neighbourhood though and she soon finds herself in a whole heap of trouble.

I don't want to say too much about Dina's relationship with the Inn so I'm just going to say I loved it, the Inn is almost like an additional character in the story and I really enjoyed getting to see how they were able to work together against their enemies. Dina has certain abilities on her own but she is stronger by far when she is in her own territory and has the Inn's power to back her up. She really is a great main character, someone who is honourable and determined to do the right thing even if it puts her life at risk, in fact Dina is the kind of person you'd want at your back if you were in trouble. There has been tragedy in her past but that has just made her all the more determined to make a success of her Inn and to build a legacy that she can be proud of.

The romance takes a back seat in this story which is a good thing because the authors spend more time focusing on their world building and introducing the characters but we are treated to a couple of alpha hotties who I'm looking forward to getting to know better. Normally even a hint of a love triangle would have me running in the opposite direction but I'm glad to say that isn't the case here and I'm actually really intrigued by both of the potential love interests. First you have Sean, an alpha werewolf who knows very little about the supernatural world and where he came from, he has his eyes opened in a big way but although it comes as quite a shock he takes most things in his stride. The scenes between him and Dina had me laughing out loud on several occasions and I loved seeing her put him in his place rather than going stupid around him just because he's a sexy man. They have great chemistry and I want to see them spending more time together as the series continues.


The other guy Arland is a vampire from a powerful family, he is noble and proud but very respectful when it comes to Dina. He understands her abilities so knows just what she is capable of but he still wants to help keep her safe. Both guys are protective and they can be quite growly towards each other but Dina won't accept any of their crap and she is more than capable of standing up to them. We don't get to know Arland quite as well but there are some great scenes with him and I found myself really liking him too. I'm not going to say who I think Dina will end up with because although I have picked a team I don't think it would take a lot to make me switch sides!


I could go on and on about the things I loved about this book but I really think you should just read it for yourself rather than have me spoil it for you. The special edition print version contains beautiful images of the main characters (these could only be improved if they were in colour) and I believe these illustrations are included in the ebook too. I'm excited that this is the first book in a new series and any new books will automatically go to the top of my to buy list the second they are released! If you're looking for a new urban fantasy series that is unique and memorable then Clean Sweep is a must read, as is anything else Ilona Andrews has ever written!

Source: I received an ebook of this from the author in exchange for an honest review but I have also purchased my own print copy