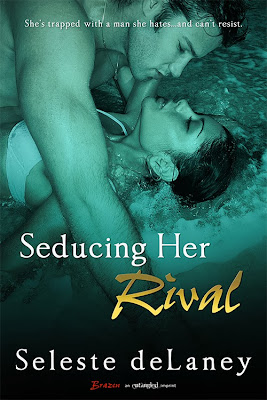 She's trapped with a man she hates...and can't resist.

When cruise ship turbulence sends children's charity guru Mercedes Vega—and her tropical cocktail—flying into a mysterious stranger, she's convinced her free vacation is a dream-come-true. But Lucas Bellamy isn't just sexy as sin and richer than God. He’s her business rival, determined to outbid her charity for the land she desperately needs…a fact she doesn't learn until after a night of mind-blowing, toe-curling sex. Unwilling to give up, she formulates a plan to make the charming playboy fall in love with her and back out of the property deal.

Lucas is drawn to Mercedes, but he won’t stand down—after all, he has promises of his own to keep. But one scintillating night with the enigmatic brunette leads to another, and before long, it’s unclear who’s seducing who, leaving Mercedes wondering whether the man she’s supposed to hate is the only salvation from her past.

Review:
When Mercedes wins an all expenses paid cruise trip the only reason she decides to go is so she can use the opportunity to raise money for her children's charity. They have the opportunity to buy the perfect property to build a safe and secure play area for children in need but are short on funds. The last thing she needs is to be distracted by the sexy millionaire Lucas but since he seems happy to help her with her goal she relaxes enough to let him slip past her defences. What she doesn't realise is that Lucas is also bidding on the same piece of land that she wants so desperately. What will happen when she discovers who he really is and the fact that he's been keeping secrets from her?

Seducing Her Rival was a sexy read and I enjoyed both the banter and the chemistry between Lucas and Mercedes. In a lot of ways the two of them are complete opposites, their backgrounds couldn't be more different and neither could their circumstances but they were both influenced by events in their past that have made them incredibly passionate about their different projects. Both of them want to do good and they're prepared to work hard to achieve their goals.

Although I liked both of the characters and there were things I enjoyed about the story this didn't end up being an amazing read. I'm not even quite sure why it missed the spot for me, on the surface it should have pretty much everything I'm looking for in a contemporary romance but unfortunately, it didn't wow me. I had trouble connecting with both of the main characters so even though I admired their plans I didn't feel particularly invested in seeing them achieve them. I was also annoyed at Lucas for continuing his relationship with Mercedes after he realised who she was, I think if he'd come clean as soon as he worked it out I would have had more respect for him but it felt a bit like he was playing with her after that.

I didn't dislike the story though and it was a quick and relatively fun read so it might be worth giving it a try. Obviously this story worked a lot better for other people than it did for me so I'd recommend reading other reviews before you make up your mind about it.

Other Reviews:
If you have reviewed this book on your blog please leave a link to your review in the comments & I'll add the link here.
at 19:33