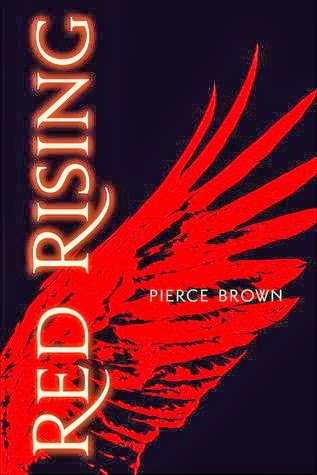 Break the chains.
Live for more.

Darrow is a Helldiver, one of thousands of men and women living in the vast caves beneath the surface of Mars, a people who spend their entire lives toiling to mine the precious elements that will make the planet habitable.

Until the day Darrow learns that it is all a lie. That Mars has been inhabited by generations by a decadent ruling class of people known as the Golds, who view the workers beneath them as nothing more than slave labour, to be exploited without a second thought.

With the help of a mysterious group of rebels, Darrow disguises himself as a Gold and infiltrates their command school, intent on taking down his oppressors from the inside.

But the command school is a battlefield - and Darrow isn't the only student with an agenda . . .

Review:
Sometimes you stumble across a book that is so good it just blows your mind. Red Rising is one of those books and I want to grab a stack of copies and walk around the streets handing them to everyone I come across telling people that they NEED to read this book! I know it's only January but I would be incredibly surprised if this book isn't at the top of my list for best books in 2014. I've been putting off writing this review for days because there is no way I can do it justice but I'm going to try, I can't put it any more simply than "BUY THIS BOOK NOW" but we'll see if I can come up with something a bit more meaningful.

Darrow is from a family of pioneers and for generations his people, known as the reds, have worked in the mines on Mars digging for the Helium 3 needed to terraform the planet and make it hospitable for humans to live on the surface. They live hard and die young but they do it for the greater good of humanity knowing that their sacrifices will create a home that is desperately needed for future generations. Things may be tough but Darrow is generally happy with his lot, he loves his wife and lives for her and his family, they don't have much but they find joy in the small things and that's what makes life bearable. That is until he discovers the extent of the betrayal against his people and discovers that the higher echelons of society have been living on the surface in luxury for centuries. The Golds look down on the reds seeing them as nothing more than slave labour and everything that Darrow has ever been told about his role is a lie. With the help of a group of rebels Darrow is given the chance to fight back against the oppression of his people but in order to do that he will have to give up all that he cares about, he will have to turn himself into the one of the people he hates most and if he fails it will cost him everything.

I can't even begin to tell you what an emotional roller coaster Red Rising is, this book completely tore my heart out and ripped it into tiny little pieces - I don't think I've ever cried so hard less than 50 pages into a book before! It's incredible that Pierce Brown had me invested in his characters so quickly but that's a strong testament to how powerful his writing is. I was hooked into this story from the very first page and with an opening like "I would have lived in peace. But my enemies brought me war." who can blame me? Darrow has to be one of the most memorable characters I've come across in a long time. He isn't a natural leader, he was happy with his life as he knew it and didn't go looking to change things but when his hand is forced his need for vengeance takes him to places he never could have imagined. I loved the fact that Darrow isn't perfect, he is fallible and he makes a lot of mistakes along the way but he is constantly learning from them and doing his best to improve. He is the kind of guy who is prepared to fight for what he believes in even if the battle was brought to him rather than one that he went searching for. He is forced into a world that his upbringing could never have prepared him for but his will to live, his strength and his need for revenge pull him through.

Along with Darrow we are treated to a whole host of memorable side characters, I don't want to tell you too much about what happens during the rest of the book because I really think you'll get more enjoyment out of it if you go in blind but trust me it will be a memorable journey. This is a dark story, Darrow finds himself in a violent world where things are cut-throat and kill or be killed. He is forced into situations where there is no safe or easy outcome and that means he has to do terrible things to survive, he takes no pleasure in it but he will gorydamn do whatever it takes to make it. He can't survive alone though and that means putting his trust into people who are his natural enemies. He has to battle with himself as he starts to see some of the people he should hate as his friends but nothing is ever quite what it seems and it is impossible to know who he can really trust or who will stab him in the back at the first opportunity.

Red Rising is an impressive debut and the start of what is sure to be an incredibly popular trilogy. I don't say that lightly and I honestly believe that we will see big things from Pierce Brown in the future. If you are only going to take my recommendation for one book this year then please let it be for this one - this really is a book that I definitely want everyone to read. Whether you are a fan of dystopian stories or if it's a genre you're sick to death of you will love this book. It has none of the typical YA clichés and will surprise you at every turn. My only complaint is that I've got to wait to get my hands on the sequels but I guarantee that I'll be rereading this story to tide me over until they're published.