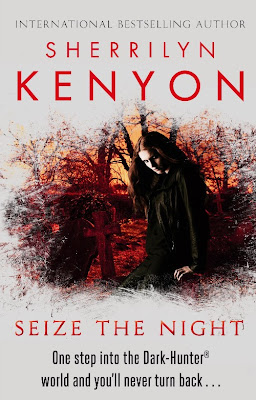 Valerius isn't a popular Dark-Hunter - he's a Roman, which means that the largely Greek Hunters have a major grudge against him and his civilisation for superseding them. To make things worse, he's very conscious of his aristocratic background and breeding. So it serves him right when he runs into Tabitha Devereaux. She's sassy, sexy and completely unwilling to take him seriously. (Not to mention she's also the sister-in-law of Kyrian, a former Dark-Hunter and Val's mortal enemy.)

What Tabitha does take seriously is hunting and killing vampires, and soon she and Val have to grapple with the deadliest of all Daimons - one who's managed to come back from the dead, and one who holds a serious grudge against both of them. To win against evil, Val will have to loosen up, learn to trust and put everything on the line to protect a man he hates and a woman who drives him crazy.

Review:
I'm going to admit that I was a bit nervous about picking up Seize the Night, having seen Valerius through both Kyrian and Zarek's eyes I went into this book feeling quite prejudiced towards him. Although we had started to see a nicer side to him in Night Play I still wasn't expecting to like him all that much but I should have known that Sherrilyn Kenyon would completely turn my opinion on it's head. It didn't even take her that long to do it and I found myself feeling sorry for him very quickly!

Valerius comes across as very high and mighty like he thinks he is better than everyone else but when you get to know him you realise that it is a self defence mechanism that he has perfected over the centuries of his life. We already knew a little about his background and the family he was born into but we get to see just how badly he was treated by his father and older brothers and it was quite heartbreaking to watch. As much as I understand why Zarek was so angry with him seeing things from Valerius's side show that he was as much a victim as Zarek was. Kyrian has even less reason to treat Valerius the way he does and there were times I actually found myself getting quite annoyed with him. After everything Valerius suffered in his human life he has gone through centuries of exile from his fellow Dark-Hunters, they don't trust him and nobody willingly spends time with him so it is no wonder that he has developed such a bad attitude.

Tabitha is the first person to see through his defences to the vulnerable man underneath. She accepts him for who he is and doesn't blame him for his family's actions. The two of them are complete opposites in a lot of ways, where Valerius is very buttoned up and acts like he has a stick up his ass Tabitha is much more fun loving. She likes to have fun, doesn't take life too seriously and takes great pleasure in shocking Valerius with her actions. The interactions between them were absolutely hysterical, there were so many times I found myself snorting with laughter at the way she provoked him and his shocked responses. I just loved every minute spent with the two of them and it was great to see Tabitha stand up for her man around the other Dark-Hunters. Seeing how their opinions about him were slowly changed was wonderful and Tabitha played a massive role in that.

Alongside the scorching hot romance there are some really interesting developments in the world as a whole. There were times when I had my heart in my mouth and I can't tell you how shocked and horrified I was by some events that occurred - this really was quite a traumatic read and parts of it brought tears to my eyes. This series just gets better and better with every instalment and I can't wait to continue the journey in Sins of the Night.