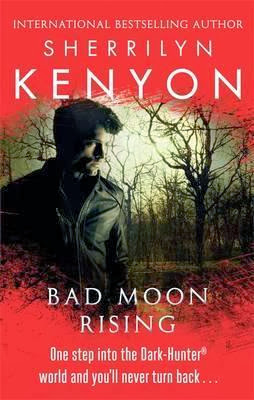 Fang Kattalakis isn't just a wolf. He is the brother of two of the most powerful members of the Omegrion: the ruling council that enforces the laws of the Were-Hunters. And when war erupts among the the lycanthropes, sides must be chosen. Enemies are forced into shaky alliances.

When Aimee, the woman Fang loves, is accused of betraying her people, her only hope is that Fang believes in her. Yet in order to save her, Fang must break the law of his people and the faith of his brothers. That breach could very well spell the end of both their races and change their world forever.

Review:
I really enjoyed getting back to the roots of the Dark Hunters series with Fang and Aimee's story. We've seen a lot of both of them in previous books, and in fact, their story shows us some past events from their perspectives, so it was fun to be reminded of how things began. These two have been pining for each other for a long time now but their romance is totally forbidden because she's a bear and he's a wolf. Aimee's family (her mother in particular) is all about protecting their bloodlines and she would never accept having a wolf for a son-in-law.

It was heartbreaking for poor Aimee to have to put her desires on hold because she knew she'd never get her mother's approval, she was torn between loyalty to her family and her love for Fang. I'd actually forgotten how dislikable her mother can be and I found myself really angry at her here but I did enjoy the love between Aimee and her brothers and how protective they all are of each other.

Fang has a very complicated relationship with his brothers Vane and Fury and we get to see that change throughout this story. He's had a pretty hard life so it was nice to see him finally gain acceptance and find his place in their family all while finding love with Aimee too. We also get to see a whole bunch of other familiar faces which is one of my favourite things about this series. The cast is so huge now that it can be hard to remember who everyone is but I think Sherrilyn Kenyon does a pretty good job of reminding us about important details without bogging down the story.

Fang and Aimee make a very sweet couple and I really enjoyed their romance. As always with this series there are plenty of other plots going on at the same time but their relationship never suffered and it was spread out over such a long period of time that it definitely wasn't rushed. It was fun to be reminded of events from some of the early books but it made me realise how much I've already forgotten so I guess a reread will be in order at some point. First I need to catch up with the new releases though and happily I've got a long way to go before that happens!