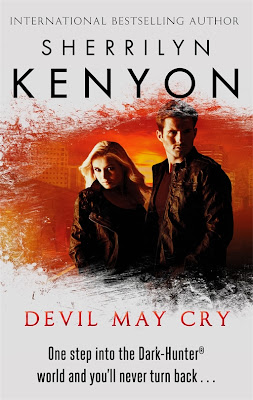 Ever since the moment his status as a god was revoked by Artemis, Sin has done nothing but plot his revenge. He kidnaps a woman he believes to be the goddess, but she is Artemis's servant, Katra. And instead of imprisoning her, Katra captures him and refuses to release him until he promises not to seek vengeance on her mistress.

Despite himself, Sin finds himself intrigued by Katra, who is nothing like the goddess she serves. She's fierce, true, but she's also compassionate and loyal. However, Sin is not the only enemy Artemis has and it quickly becomes apparent that he must help Katra save her mistress or the world as we know it will end.

Review:
I was excited when I found out that Katra was the heroine of Devil May Cry, I've always liked her character and was very intrigued to find out more about her connection to Artemis and why she is so willing to serve such a horrible goddess. I have to say I loved finding out more about Kat's background, there were so many surprises in her past and finding out who her parents were just blew my mind! Some major reveals right there and they're going to have a knock on effect throughout the series. There is a lot going on in this story, we get a lot of background on upcoming major characters, we get answers to some of the questions we've been asking for the last few books and my anticipation is definitely higher than ever when it comes to carrying on with the series.

I love that Kat is such a fierce heroine, she has her own powers and she has a strong sense of justice. We've seen her protecting others in previous books, even when she has to go against Artemis to do it and I knew she would be a heroine I'd enjoy reading about. Sin has every reason to hate Kat, just for her connection to Artemis since Artemis is the one who stole his powers and made him lose his god status but although he captures Kat just to get revenge he quickly realises that she's as much a victim as he is. I loved seeing him come to terms with the fact that he'd have to choose between his revenge and keeping Kat in his life, it isn't easy for him to put something he has dreamed of for so long to one side but he knows that Kat is worth any price. Kat feels terrible about what happened to Sin, especially when she realises that she played a role in his misfortune thanks to the lies Artemis told her. She is determined to make things right even if it means losing Sin forever.

I loved getting to see more of Simi and her sister Xirena in this story, the two of them never fail to make me laugh and I loved seeing them so protective of Kat. I also really enjoyed seeing a further glimpse into Ash's life, things that have been kept secret from him for such a long time are suddenly revealed and I can't wait to see how he responds to those revelations. He seemed to take the news quite calmly but I have a feeling we're going to see more of his angry side once he's had time to take it all in.

Sherrilyn Kenyon adds even more to her world building in this book, we learn about the Gallu demons who Sin has spent so many years fighting, we get to see more of both The Destroyer and Artemis and we are also introduced to a whole new set of enemies who are plotting to end the world. Things seem to be gearing up towards an epic showdown and I can't wait to find out what happens next.