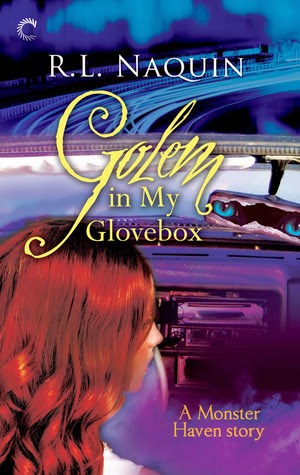 In her role as Aegis, Zoey Donovan has rescued and cared for hundreds of monsters and mythical creatures. Now humans are the ones in need of her help. Someone with a personal vendetta against the Board of Hidden Affairs has kidnapped all the other Aegises in the country--including Zoey's mother.

With the Hidden government in shambles and a string of deadly clues to follow, Zoey and her reaper boyfriend set out on a cross-country chase to stop the kidnapper from killing the captured Aegises. Along the way, they pick up a miniature golem who's on a quest to find his humanity . . . and may be the key to solving the grisly clues.

If Zoey succeeds in defeating this new evil, she'll finally be reunited with the mother she lost over twenty years ago. But if she fails, she'll become the final victim.

Review:
I've been a huge fan of this series since I first discovered it, it's perfect light hearted and funny urban fantasy and I know I can pick up any book in the series when I'm in the mood for something that's going to make me giggle. I absolutely love the number of different Hidden creatures that R.L. Naquin has included in the series, she always manages to introduce us to something new with each book and this instalment brings golem, Griswald, who is accompanying Zoey and Riley on a road trip as they hunt the person who kidnapped the missing Ageises. Zoey is desperate to find out what happened to her mother and find a way to bring her home but their enemy is always more than one step ahead of them and they aren't going to make it easy for her.

As much as I love this series and enjoyed Golem in My Glovebox for some reason that I'm having trouble putting my finger on I didn't love it as much as I'd expected to. It's still a fun story and has all the humour you would expect from this series, we get to catch up with a few of our favourite characters and we get to see Zoey once again out of her comfort zone so I'm not quite sure what was missing. I think it just didn't have quite the same level of tension as the previous instalments and I have to admit I found a lot of the driving around America was a little on the boring side. The various stops they make, along with the people they meet, were great but in between there were some slower times and I also felt that the ending was a bit of a let down. I think I just missed the rest of the gang, characters who normally play a big part in the story were left back at Zoey's house and it just wasn't the same without them.

In spite of my minor niggles this is still a solid story, there is a lot going on and I enjoyed seeing Zoey and Riley get the chance to spend some quality time together. Even when they're out and about they still have plenty of interruptions though, I guess that's the hazard of being the only Ageis left - Zoey is constantly on call for all kinds of Hidden problems. I'm looking forward to seeing what happens to the couple next in Demons in My Driveway.