I absolutely love Samanthe Beck's Private Pleasures series so I'm thrilled to be taking part in the blog tour to celebrate the release of the third book in the series, Falling for the Enemy. Samanthe Beck has created a fabulous series that is sure to be a hit with fans of small town romances, these books are all fun, warm hearted and incredibly hot and I can't recommend them highly enough. You can read my review of the first book, Private Practice, HERE and I'll be posting my reviews of Light Her Fire and Falling for the Enemy later today so make sure you check back to read them.

Anyway, I have some fabulous Falling for the Enemy teasers for you and a brilliant giveaway to share but first let me give you a little more information about the book: 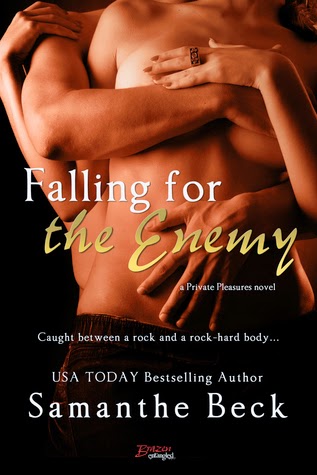 Book Blurb:
Caught between a rock and a rock-hard body . . .

Salon owner Virginia Boca has declared herself celibate . . . at least until she wins the election for mayor of Bluelick, Kentucky. No hot men. No sex. And her plan to play the good girl might have worked—if the mysterious, hard-bodied stranger she’s seen around town hadn't pulled her from the street and saved her life. The least Ginny can do is offer her savior a free haircut.

But when an innocent haircut turns into hours of wickedly hot sex, former Navy SEAL Shaun Buchanan knows his plan to keep a low profile is shot. Especially once Ginny finds out he’s the current mayor's son. With her reputation and the election on the line, Ginny seems determined to keep their nightly sexcapades a secret, but Shaun’s not willing to stay in the shadows forever . . . 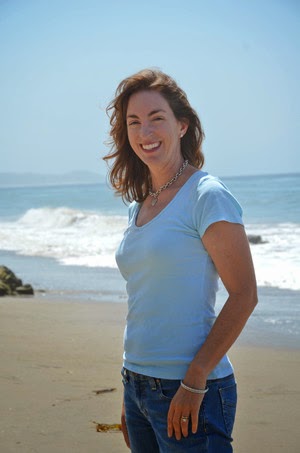 Author Bio:
Wine lover, sleep fanatic, and USA Today Bestselling Author of sexy contemporary romance novels, Samanthe Beck lives in Malibu, California, with her long-suffering but extremely adorable husband and their elementary-aged turbo-son. Throw in a furry ninja named Kitty and Bebe the trash talking Chihuahua and you get the whole, chaotic picture.

When not clinging to sanity by her fingernails or dreaming up fun, fan-your-cheeks sexy ways to get her characters to happily-ever-afters, she searches for the perfect cabernet to pair with Ambien. 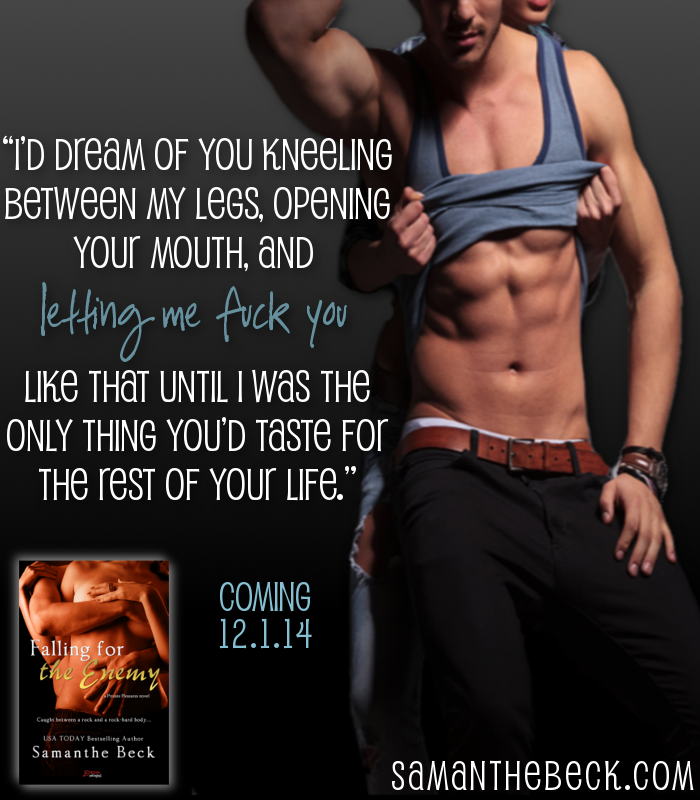 Shaun groaned and let his head fall back, and all she could do was cling to the edge of the sink while he gave her exactly what she asked for. Thrusting, withdrawing, and thrusting again in thrilling succession, using the angle of their bodies to ensure he hit all the right spots along the way. The room spun behind her closed eyelids. A heady mix of pheromones, body heat and sex stormed her senses. With frightening speed, he had her trembling at the brink again, panting and shivering and striving for relief from the pressure building inside her. Her pulse pounded, setting off a surprisingly loud echo in her ears.

She nearly jumped out of her skin when Shaun called out, “It’s occupied.”

Holy crap, the pounding in her ears wasn’t her pulse. Somebody was knocking on the restroom door. A voice from the other side said, “Hurry up in there buddy. I gotta get back on the road.”

Shaun didn’t bother with a reply, but drove into her with renewed energy, dragging her agonizingly closer to the edge of control. Her body clenched around him in a fruitless effort to cling to the moment—to a semblance of sanity—but he thrust again and sent sanity hurtling out of reach. The pressure tightened, pulsed there for one heartbeat…two…she whimpered in the face of what waited for her, and a big, calloused hand gently covered her mouth to suppress the noise.

He withdrew and rocked forward again, then froze. His eyes drifted closed, and a groan rumbled from somewhere deep in his chest.

The pounding on the door came again. “What the hell, man?”

“I’m…not…done yet,” he growled, and unleashed a series of quick, jerky thrusts. The sink rattled on its pedestal. Between her legs, the clenching became spasms. Shaun cursed, and then groaned again, a low, long sound vibrating with relief. Hard as she tried to hold it back, her own jagged moan escaped, merging with his, outlasting it, until the high-pitched cry reverberated in the tiny room and slowly subsided.

The voice came again from the other side of the door. “Forget it. I don’t know whether you ought to burn a candle when you’re done, or set fire to the place, but I know I’m not going in. See a doctor, or something.”

Brown eyes opened and stared into hers, and she detected a gleam of humor in their depths. She returned his stare while footsteps retreated across pavement. After a moment, a vehicle door slammed and a big engine rumbled to life. Picturing some disgusted trucker opting for a nice, private outcropping of limestone along the Double A over what he imagined awaited him at the Gas ’n Go had her laughing on her inhale. The result was an inelegant snort.

He grinned down at her. “Admit it, I provide a refreshing break from rose petals and satin sheets.”

She cupped his balls at the same time she stroked him, stopping just shy of the flare of his head. “So, you’re touching yourself, and thinking of me, and…”

His head dropped back of its own accord, and his breath quickened. “I’d dream of you kneeling between my legs, opening your mouth, and letting me fuck you like that until I was the only thing you’d taste for the rest of your life.”

While they both watched, liquid beaded at the head of his cock and trembled there. He shivered when she used the pad of her thumb to swipe it, pressing down hard enough to explore the small opening. Then she brought her thumb to her mouth and licked it clean.

Eyes locked on him, she gripped his thighs, spreading them slightly, and brought her mouth so close her breath ruffled the hair around the base of his cock. “Could I trouble you to do the honors?”

Hell yes. He gripped his shaft and guided it to her lips. She opened her mouth, fully prepared to take him in, but he delayed their gratification by tracing his tip along her upper lip. “You have the softest lips, Virginia. Even before I ever kissed you, I knew they’d feel amazing.” He dragged his tip along her lower lip and couldn’t hold back a groan.

She chased him with her tongue, wetting her lips in the process. “Having them sealed around you is going to feel even better.”

He placed his hand on the top of her head, spearing his fingers through her hair. “Don’t rush me. This is my dream, remember?”

“I remember everything. Tell me what comes next.”

Why he wanted to torture himself he couldn’t say, but he wanted to savor this. “Kiss it…just the tip. With those plush lips of yours. No tongue, yet.”

She wet her lips again, puckered them, and rubbed them over the tip he held out for her. Somehow he managed to keep his eyes open, even though they wanted to roll back in his head. Then she parted her lips to take him deeper.

“Not yet,” he ground out, still hoping against hope to make this last more than three seconds.

“I can’t wait. I want to cradle the weight of you in my mouth. I want to hear you beg as I take you in.” She tightened her hold on his thighs and aimed a plaintive look at him.

“Sweet Virginia, you’ve got me so worked up I can’t trust myself. If you let me in your mouth, I’m going to own it. I’ve been fantasizing about this too long to sit by like a gentleman while you have your fun.” 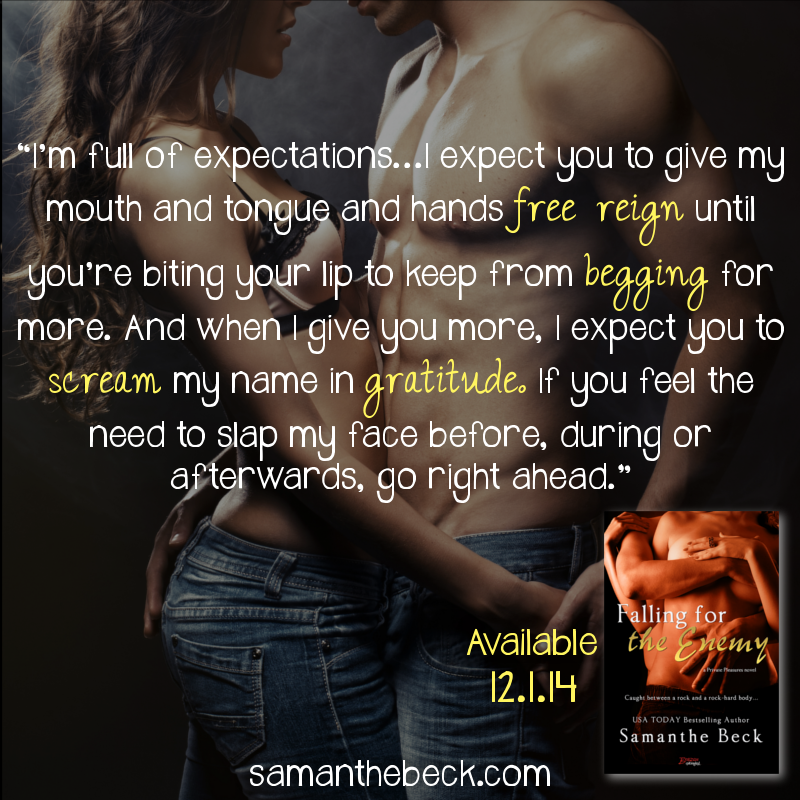 As part of the blog tour Samanthe Beck is giving away a print copy of Light Her Fire and Private Practice, Bead Bracelet + $50 Amazon Gift Card (US shipping ONLY). You can enter the giveaway using the rafflecopter form below, the winner will be contacted directly by Samanthe or her publicist so that they can arrange to send out the prize.