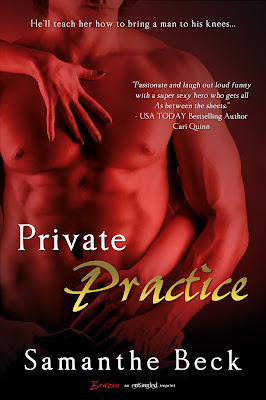 Dr. Ellie Swan has a plan: open her practice in tiny Bluelick, Kentucky, so she can keep an eye on her diabetic father, and make hometown golden-boy Roger Reynolds fall in love with her. But Ellie has a problem. Roger seeks a skilled, sexually adventurous partner, and bookish Ellie doesn’t qualify.

Tyler Longfoot only cares about three things: shaking his bad boy image, qualifying for the loan his company needs to rehab a piece of Bluelick’s history, and convincing Ellie to keep quiet about the “incident” that lands him on her doorstep at two a.m. with a bullet in his behind.

The adorable Dr. Swan drives a mean bargain, though. If sex-on-a-stick Tyler will teach Ellie how to bring a man to his knees, she’ll forget about the bullet. Armed with The Wild Woman’s Guide to Sex and Tyler’s lessons, Ellie is confident she can become what Roger needs…if she doesn’t fall for Tyler first.

Review:
Ellie has moved back to her home town to take care of her father and to open her own medical practice. She is ready to settle down so when she hears that her childhood crush is now single she is determined to win his heart. She's heard that Roger has unusual tastes in the bedroom though and although she isn't completely inexperienced she wants to learn how to bring him to his knees. That's where Tyler comes in, he's town bad boy who has always been a hit with the ladies and has plenty of experience in the bedroom. When he comes to Ellie asking her to treat a gun shot wound to his butt she agrees not to report the injury if he teaches her everything she wants to know about sex. As Ellie and Tyler spend time together she starts to wonder if Roger really is her dream guy after all but would Tyler be interested in anything more permanent between them?

Private Practice is such a fun read and it's hard to believe that this is a debut novel - I'm telling you now that Samanthe Beck is an author you're going to want to watch out for in the future! If you're looking for a sexy contemporary romance that has great characters, hot chemistry and will make you smile as much as it makes you swoon then this book is just what you're after. I don't think the smile left my face the whole time I was reading!

Tyler is sex on a stick, absolutely gorgeous and with a well earned bad boy reputation but he also has a heart of gold. Although he isn't one to turn down sex when it is offered to him he has never been a heart breaker and in spite of his reputation as a player and someone who doesn't take life seriously he actually runs a successful business and does a lot of good work for the community. He's the kind of guy that grew up when nobody was looking and people just don't seem to look past his reputation to see what a kind and genuine guy he is. He thinks giving Ellie lessons in sex will be fun but he is sick of women only wanting him for one thing and he sets out to show her just how good they could be together as a couple, not just in the bedroom.

Ellie is a more serious person, she has spent so long focusing on her studies that although she isn't completely inexperienced she is much more comfortable when she is playing by her rules. She likes to plan things out and gets nervous when things don't turn out the way she expects them to. Tyler pushes her out of her comfort zone and no matter how hard she tries to set the boundaries between them she finds him impossible to resist. Tyler helps Ellie lighten up and brings out her more passionate and playful side, they have fantastic chemistry but also make a real connection over their similar backgrounds. I think what I enjoyed most was how playful they were together, their banter was fantastic and I loved that although Tyler is supposed to be giving her lessons it takes quite a while for them to actually give in to the attraction between them. There is a nice build up of sexual tension and it was really worth the wait.

I really enjoyed Private Practice and I'm definitely going to be reading more from Samanthe Beck in the future! 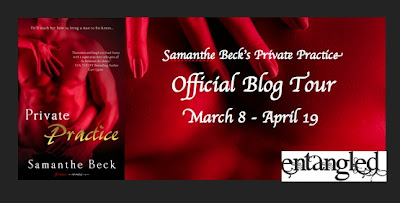