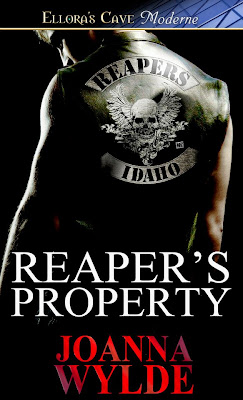 Marie doesn’t need a complication like Horse. The massive, tattooed, badass biker who shows up at her brother’s house one afternoon doesn’t agree. He wants Marie on his bike and in his bed. Now.

But Marie just left her abusive jerk of an ex-husband and she’s not looking for a new man. Especially one like Horse—she doesn’t know his real name or where he lives, she’s ninety percent certain he’s a criminal and that the “business” he talks with her brother isn’t website design. She needs him out of her life, which would be a snap if he’d just stop giving her mind-blowing orgasms.

Horse is part of the Reapers Motorcycle Club, and when he wants something, he takes it. What he wants is Marie, but she’s not interested in becoming “property of”.

Then her brother steals from the club. Marie can save him by giving Horse what he wants—at home, in public, on his bike… If she’s a very, very good girl, she’ll get lots more of those orgasms only he can offer, and he’ll let her brother live.

Review:
Marie has escaped from her abusive husband and is living with her brother until she finds her feet again. She wants to regain her independence and the last thing she is looking for is another man who wants to take control of her life. She may be attracted to sexy biker Horse but she knows nothing about the the Motorcycle Club culture and she isn't interested in becoming his property so she turns down his offer to become his old lady. Horse has never wanted anyone as much as he wants Marie and when her brother gets himself in over his head with the Reapers MC it gives Horse the perfect opportunity to claim her. Marie holds her brother's life in her hands, either she goes with Horse and gives him everything he asks for or her brother will pay for his crime with his life.

I want to start this review by saying that this is not a traditional romance, if you're looking for hearts and flowers then this probably isn't the right book for you. However, if you're looking for something that is gritty, raw and dirty then Reaper's Property will be right up your street. I have to admit I knew very little about the whole MC (Motorcycle Club) culture before I picked up this story and I found it utterly fascinating to read about. These guys have their own set of rules and a code of honour that they stick to religiously. They may be sexist and happy to break the law but they look after their own and the club is like a very large, close knit family. The men are alphas to the extreme, tattooed hard men who fight hard but play harder, they know what they want and they go out and get it. Women fall into two categories, the sweet butts who are just there to cater to the whims of anyone who wants them and the old ladies who are special, protected and cared for members of the group. Members of the MC don't take on an old lady lightly but when they do she becomes the centre of their world, she will be treated with a respect and care that is never shown to the sweet butts who hang around on the sidelines. The MC world is a misogynistic one, one that is downright disturbing at times but that doesn't make it any less compelling to read about.

Horse is a sexy, badass mofo, one who makes no apology for who and what he is. He sets his sights on Marie and nothing is going to stop him from making her his. As overbearing as he can be he also has a softer, sweeter side and the fact that this story is told from dual points of view helps the reader get inside his head and see just how much he cares for Marie. In the beginning I didn't think I was going to like him at all but I have to admit that he stole my heart by the end of the book, as much as I don't think I could live the MC lifestyle myself I could definitely see Horse's appeal! Marie starts off as quite a weak willed character, she did stand up for herself when Horse first asked her to be his old lady but apart from that she seems to accept whatever he tells her pretty quickly. Thankfully she really comes into her own once she starts to understand how the Reapers work. When she meets the other old ladies you start to realise that while the men think they hold all the power the saying that behind every great man is a great woman couldn't be more true and these women have their men twisted around their little fingers.

Reaper's Property is a dark and sometimes disturbing look at the MC lifestyle, Joanna Wylde doesn't shy away from showing the harsher side to the gang and that just makes it even more addictive to read about. At the same time she shows that at it's heart the gang is all about family, friends and brotherhood. Every member would walk through fire for each other, they have each other's backs through thick and thin and they share a lot of fun and laughter along the way. Horse and Marie may not have a conventional love story but it is still a love story. Their relationship is full of highs, lows and hot sex but it's about finding a connection with someone and overcoming your differences to make things work. I really enjoyed this story and I can't wait to get my hands on the next book in the series. While I'm waiting I'm definitely planning on checking out more MC books though so let me know if you have any recommendations!