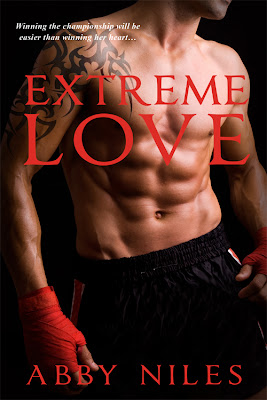 Used to the average Joe, Caitlyn Moore is overwhelmed when the supremely masculine Dante Jones walks into her life and expresses an interest in her. At first she pushes him away, refusing to encourage the attention of a cage fighter. Then she learns Dante has a love ‘em and leave ‘em reputation. What better way to fine-tune her non-existent flirting skills than with a male who won’t stick around? But Dante has no intention of being a practice dummy; he’s out for all or nothing. Now Caitlyn must accept Dante - violent career and all - or let him go.

Dante “Inferno” Jones has one goal: win the Welterweight Championship. At a time when focus is crucial, the last thing he needs is a distraction. Yet Caitlyn Moore becomes a challenge he can’t resist. When the light-hearted pursuit shifts to a battle to win her heart, his focus is shot. Faced with losing the biggest match of his career, Dante must decide if his extreme life also has room for Extreme Love.

Review:
It has taken a lot of hard work and dedication for Caitlyn to loose 80lbs but even though she has dropped from a size 22 to a size 12 she still feels fat. She is insecure about her body and has continued to hide behind her baggy clothes. When her best friend introduces her to Dante, a sexy MMA fighter with a perfect body and a whole heap of female fans, she can't believe that he is interested in her. Why would he possibly want her when he could have one of the size zero real life barbie dolls who hang around the MMA circuit? Dante knows straight away that there is something special about Cait, she is beautiful both inside and out and he finds her curvaceous figure sexy as hell. He isn't used to being turned down by women but he is used to fighting for what he wants, now he has set his sights on Cait he will do whatever it takes to win her over. But with the most important fight of his career looming Dante can't afford to lose focus, can he win over the girl of his dreams and win the Welterweight Championship?

As someone who has struggled with my weight for my whole life I have to start this by saying that overweight heroines / heroines who have lost a lot of weight can be a bit hit and miss for me. I didn't realise that Extreme Love would focus so much on Cait's weight loss journey and how it has effected her emotionally when I picked it up and I have to admit I probably would have been a bit put off if I had done. I'm glad now that I didn't have that information before hand because I really enjoyed Cait's story and I would hate to have missed it. Cait isn't the perfect heroine, she is insecure and neurotic and that causes her to make stupid decisions at times. There were a few occasions where I wanted to throttle her BUT that made her feel so much more realistic. I've been in the position she was in, where having lost a huge amount of weight you should feel fantastic about yourself but you still find yourself worrying about your figure and feeling unattractive. Unless you've gone through a similar journey you might not find it so easy to identify with Cait but the way she thinks and feels at times were so like my own experiences that the author could have interviewed me before she created her. You have to admire Cait for her determination to lose the weight and for the way she is now working so hard to make a difference to others who are in the same position she was. She may have low self esteem when it comes to her own figure but that doesn't stop her standing up for others and I really respected her for that.

Now any good romance book needs a fantastic hero and that is exactly what we get with Dante. Not only is he one gorgeous specimen - muscular, fit and powerful with a body to die for - but he is also a genuinely nice guy. He is protective, caring and so, so patient with Cait when I think many guys would have just given up and walked away. He works hard to help Cait see just how beautiful she really is and I loved watching her start to gain confidence with the help of Dante and her friends. If there was one thing that bugged me about the story it was the fact that other characters were constantly putting Cait down because of her weight. I couldn't see why anyone would look at a woman who is a size 12 and immediately start calling her Miss Piggy or make Oinking noises at her. I know full well that that kind of thing happens, I've experienced it first hand, but I would have found that more believable if she still had more weight to lose rather than being so close to target. I get that this was to feed into her insecurities and to annoy Dante but I think that if they had come up with some other kind of insults I would have found it more believable.

Overall I found Extreme Love a really enjoyable read though, I loved both main characters (in spite of Cait's flaws) and I also really found myself liking some of the side characters. I actually contacted the author and she has confirmed that this is the start of a new series and I'm excited to read more about the other MMA fighters (Julie and Tommy's story, Fighting Love, is up next and due for release in December). I also hope we'll get to see glimpses of Dante and Cait as the series continues. I'm definitely adding the next book to my wish list and I would recommend this to anyone who wants to read a story about a normal girl who wins the heart of the hero of her dreams.