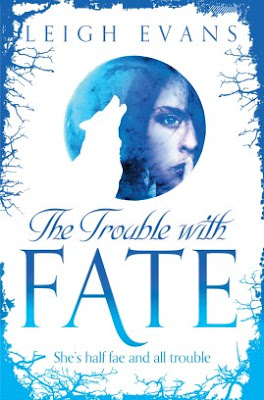 She’s half fae and all trouble...

Hedi looks normal. Yet that’s taken effort. Her fellow Starbucks baristas don't see her pointed ears, fae amulet or her dark past, and normal is hard for a half-fae, half-werewolf on the run. Hedi’s life changed ten years ago, when her parents were murdered by unknown assassins. She’s been in hiding with her loopy aunt Lou. Whatever they wanted she’s determined they won’t get it.

Things change when wolves capture Lou, forcing Hedi to steal to free her – for if she can offer up a fae amulet like her own they may trade. But it belongs to a rogue werewolf who betrayed Hedi on the night of her greatest need. Over forty-eight hours, Hedi will face the weres of Creemore, discover the extent of her fae powers and possibly break her own heart in the process.

The Mystwalker Series:
The Trouble with Fate
The Thing about Wolves (Published as The Thing About Weres in the US)
The Problem with Promises
The Danger of Destiny

Review:
Hedi and her aunt have spent the last 10 years in hiding, ever since her parents were murdered and her brother was captured and taken to the fae realm. Hedi is half fae and half werewolf but she has worked hard to stay away from other supernaturals, trying to remain hidden amongst humans. She is forced to come out of hiding when her aunt, Lou, is captured though. If she can steal a fae amulet from another werewolf Lou's captors may be willing to make a trade but coming up against the rogue wolf she has loved since she was a child isn't going to be easy for her and if Robson Trowbridge recognises her she'll be in a whole new heap of trouble.

The Trouble with Fate is a good start to what I think is going to be a great series, Leigh Evans has created an interesting world that is full of history and new twists to the standard mythology. I have to admit there were times when we were given so much information that I felt a little overwhelmed and struggled to understand exactly what was going on but that is one of the hazards that comes with picking up a new series. It isn't easy for authors to create the right balance between giving enough information to get readers hooked and giving them too much to cope with in one go. Unfortunately in this case it does sway towards too much but in spite of that I still enjoyed the story enough to want to carry on with the series. The plot was fast paced enough that it kept me reading even when I was a little confused about things and it felt like I read the whole book quite quickly.

I really liked main character Hedi, she isn't perfect in any sense of the word but she doesn't set out to harm anyone. She has only survived this far by being a liar and a thief which aren't really the best qualities to have but her actions were out of necessity rather than by choice. Since the death of her parents Hedi has never really had anyone to rely on, although her aunt should be the one protecting her for a long time it has been the other way round and Hedi has been the caregiver and provider for years. She had to grow up quickly and you can see the effect that had on her. I really liked the fact that Hedi stood up for herself and the people she cared about though, even when the odds are against her she refuses to give up and walk away. She has some interesting abilities that I'm looking forward to seeing develop further and I appreciated that using her magic came with some nasty side effects. It seemed right that she would have to pay for using so much power and she needed a little vulnerability to balance her character.

Trowbridge was the son of the Creemore pack Alpha and should have taken over as leader after his father's death. Unfortunately he was set up by an unknown enemy and the rest of the pack believe that he murdered both his parents and his wife so they chased him away. For years he has been living a lonely life as a rogue werewolf struggling with his grief and the guilt he feels about not being there to prevent the deaths of his loved ones. I have to admit it took a while for Trowbridge to grow on me, I just felt that he had walked away from his pack a bit too easily and I was annoyed that he never tried to clear his name or find out who had set him up. I would have expected an alpha wolf to be revenge hungry and determined to claim his rightful place so his actions didn't ring true to me. I was also a bit unsure about the romance that developed between him and Hedi when he was still clinging on to the memory of his wife. As we get to know him better and find out more about his past he did start to grow on me and I enjoyed watching as the pair got closer. The first sex scene between them was more funny than hot though and there was a point where I was a little grossed out by the idea of the mating knot (even though I'm still not 100% sure I understand it).

As much as I had a few issues with the story I did find myself drawn into the world Leigh Evans has created and I do really want to find out what happens next. The story took a very surprising turn towards the end and I have no idea where things will go from here. I have been left with plenty of questions that I hope we will start finding out answers to as the series continues and I'll definitely be picking up The Thing about Weres to see where what happens.

Source: Received from Tor in exchange for an honest review