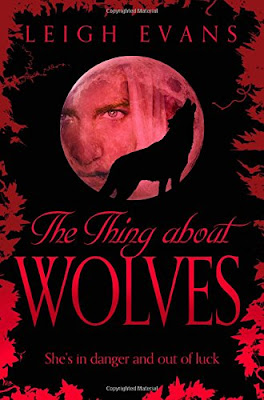 Being put in charge of a werewolf pack might be someone's dream, but it's Hedi's nightmare. Hints that it's not working out include the Creemore wolves wanting her blood. And the Council of Weres wanting her dead . . .

Then all Hedi's wishes are granted. Robson Trowbridge, pack leader, returns - and her love isn't alone. He's found her missing twin brother Lexi among the fae. With this double helping of wonderful, things should be all sunshine and flowers, but the fae lands have changed both men. Hedi's brother is dying of an addiction and her relationship with Robson may not survive the forces pushing them apart. To combat the darkness ahead, Hedi must face her dangerous were/fae heritage - and accept the consequences.

The Mystwalker Series:
The Trouble with Fate
The Thing about Wolves (Published as The Thing About Weres in the US)
The Problem with Promises
The Danger of Destiny

Review:
The Thing About Wolves (published as The Thing About Weres in the US) picks up Hedi's story about six months on from the ending of The Trouble With Fate. Since sending Trowbridge through the portal to the fae realm to save his life Hedi has been desperately trying to find a way to bring him home but so far all of her attempts have been unsuccessful. Even worse she now seems to have gained control of a werewolf pack since her mate is currently unavailable. The wolves aren't happy with her leadership, they don't trust her fae side and the fact that she can't change into a wolf isn't helping matters. Things come to a head when the Council of Weres get involved and Hedi suddenly finds herself surrounded by enemies with no way to save herself or her few allies.

Thankfully Trowbridge returns at just the right moment but he's a very different man to the one who left, while only 6 months have passed in the human realm Trowbridge has been in the fae realm for ten years and it's not been an easy life. He's changed almost beyond recognition and Hedi isn't quite sure what to make of the new version, especially since he seems to be keeping major secrets from her and it looks like he may have found it easier to move on than she did. One thing she's extremely thankful for is that he didn't return home alone and has in fact brought her long lost twin brother Lexi with him. For years Hedi believed that Lexi was probably dead so she's thrilled to have him back in her life but he's also a very different man to the boy she remembers. Lexi has been to hell and back and even now he's back in the human world he is having trouble adjusting, it doesn't help that he has come home addicted to a fae substance that Hedi doesn't have access to and now she's facing losing her brother all over again.

I remember enjoying The Trouble With Fate so I had high hopes for The Thing About Wolves but it was even better than I'd hoped for. Hedi has come a long way and she's starting to learn much more about her Mystwalker abilities which was really interesting to see. She missed Trowbridge more than anything when he was gone so it's painful for her to see him so different now he's returned, especially since he seems to be keeping her at arm's length and he has brought a new wolf with him. She is heartbroken at even the thought of him cheating on her but no matter how bad things look nothing is quite as it seems. I was actually feeling incredibly cross with Trowbridge at one point so I was incredibly relieved when we finally started to get an explanation into his behaviour. I don't really want to say too much more about the story but it definitely left me eager to read the remaining two books and I'm incredibly glad that I don't have to wait for either of them to be published!

Source: Received from Tor in exchange for an honest review