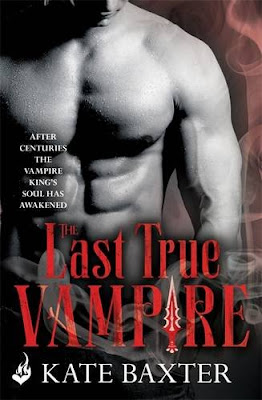 He is the last of his race. King of the vampires. Michael Aristov roams the nightclubs of LA after dark, haunted by his past and driven by hunger. The sole Ancient One to survive the slayers' obliteration, only he can resurrect the vampire race. But he's unable to reclaim his world without the woman who can return his soul . . .

Claire Thompson is mortal, yet her intoxicating blood draws Michael like a moth to the flame. Sassy and seductive, only she can satisfy his insatiable cravings, their first fiery kiss igniting an irrevocable passion.

With the future of the vampire race now at stake, Claire has the power to seal Michael's fate - forever.

Review:
Michael is the last of his kind, the only ancient vampire to survive the slayers who set out to eliminate his race. He survived their torture but has never forgiven himself for the deaths of his brethren and he has been punishing himself ever since by refusing to feed as much as he required and by keeping himself apart from the dhampirs who think of him as their king. Michael is the only one who can repopulate the vampire race and he can only do that if he finds his true mate, the one woman who will return his soul and give him the strength to start turning dhampirs. After searching for centuries he's pretty much given up hope but all his prayers are answered when he stumbles upon Claire in a nightclub. Her blood draws him like no other but it takes him a while to realise how important she is to him and she gets away before he can stop her. Now the race is on to track her down before his enemies can harm her.

I had incredibly high expectations when I picked up The Last True Vampire, let's face it when a book is compared to works by four of your favourite authors (Nalini Singh, Lara Adrian, Larissa Ione and J.R. Ward) you're going to be looking for greatness. Unfortunately I think that did this book a disservice because it was almost bound to be a disappointment. It's actually a pretty solid start and I have high hopes that Kate Baxter will build on these foundations to create a wonderful series but there were issues with this first instalment that meant I didn't enjoy it as much as I could have.

Let's start with the positive. The author has managed to put her own twist on vampire mythology, you can tell the series has been inspired by some of the author's mentioned previously but it stands on it's own enough for that not to be a problem. I'm intrigued by the connection between the vampires and dhampirs although I'm still not 100% sure I understand it fully and am hoping we'll get more information about that as the series continues. Usually the vampire society is well established at the start of a series so I'm definitely interested to see how Michael will go about rebuilding an entire race and I think seeing things from the ground up will add an interesting element to these books.

One of the things I missed the most was having a solid group of core characters who are going to be central to the series though. When we first meet Michael he very much keeps himself to himself and there is only really one dhampir who he trusts. I did enjoy the bond he had with Ronan and it looks like Ronan has a group of warriors he trusts so the cast is bound to expand thanks to him but since Michael is supposed to be the king I felt he should have been the core member of the group and the one that everyone relied on.

I actually had a lot of issues with Michael to begin with, the way he treated Claire in the beginning was despicable and a complete turn off, he constantly left her in the dark and refused to answer any of her questions so it was no wonder she found it hard to trust him. At one point he used mind control to put her to sleep for THREE WHOLE DAYS just so he didn't have to deal with her - he didn't even wake her up to feed or drink so it's a wonder she even survived! After everything he puts her through I struggled to believe the romance that develops between them even after he realised his mistakes and worked hard to turn things around. Claire was an interesting character, she starts out strong and street smart but it did seem like her connection to Michael effectively removed her brain and she started making more and more stupid decisions the longer she'd known him. To be fair they both turned things around eventually and I was happy with the way things turned out but I could have enjoyed the whole book much more if they hadn't been such idiots. I don't mind the whole fated mates thing in paranormal romance but I do like to feel that there is more than just a physical attraction between them and I'd have liked more of a slow build into a full on relationship.

In spite of the problems I had with this book I definitely want to carry on reading the series. Ronan was my favourite character all along, although I have to admit the side story with him and another dhampir Siobhan actually turned my stomach, so I was excited to find out he will be the hero of the next book. I'm kind of nervous to see how it plays out because of his connection to Siobhan but since I know she isn't going to be the heroine I'm hoping we won't have to see too much of her. If Kate Baxter can build on the positives and avoid some of the issues then I think I could really fall in love with this series so I'll be keeping my fingers crossed when I pick up a copy of The Warrior Vampire.