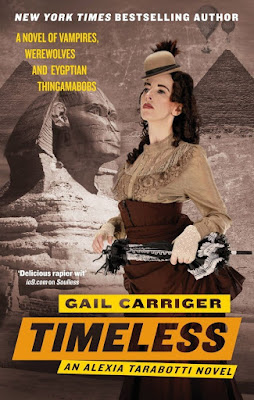 Of course, being Alexia, such bliss involves integrating werewolves into London high society, living in a vampire's second best closet, and coping with a precocious toddler prone to turning supernatural willy-nilly. Even Ivy Tunstell's acting troupe's latest play, disastrous to say the least, cannot put a dampener on Alexia's enjoyment of her new London lifestyle.

Until, that is, she receives a summons from Alexandria that cannot be ignored. But Egypt may hold more mysteries than even the indomitable Alexia can handle. What does the Vampire Queen of the Alexandria Hive really want from her? Why is the God-Breaker Plague suddenly expanding? And how has Ivy Tunstell suddenly become the most popular actress in all the British Empire?

Review:
This review will be spoiler free for Timeless but will contain major spoilers for previous books so please don't continue reading unless you've already read as far as Heartless.

I absolutely loved the earlier books in this series but for me it kind of started losing it's way in the last few books. I still enjoy the humour and I'm invested in the characters so I've kept reading but it just lost the little something that made it special. It started going wrong when Conall acted so badly when Alexia found out she was pregnant, I felt that she forgave his behaviour far too easily and I wanted to see him make more effort to apologise. I was glad that they got their relationship back on track though and I do enjoy the banter and bickering between them.

What really threw me for a loop was their willingness to let Lord Akeldama adopt their daughter, I couldn't for the life of me understand why an alpha werewolf would let his daughter be raised by another man - especially a vampire! I would have expected Conall to be horrified by even the suggestion and I didn't think it really fitted Alexia's character either, no matter how pragmatic she usually is. For the pair of them to literally end up living secretly in Akeldama's closet to be close to their daughter just didn't sit well with me. It kind of felt like the vampires were constantly getting one over on the wolves, especially when Akeldama effectively tricked Alexia into giving Queen Nadasdy the Woolsey Manor! Once again Conall just kind of shrugged his shoulders and went along with it not even particularly angry that the vampires had effectively stolen his home and conned them out of lord only knows how much money it was worth.

From that point on it's always been the vampires shouting orders while Alexia and Conall rush around doing their bidding and that continues into Timeless where they receive orders to visit one of the vampire queens in Egypt. I have to admit I enjoyed the journey to Alexandria, I loved little Prudence (who is now 2 years old) and I enjoyed the family interactions but I was so angry about the pack just going along with whatever the vampires wanted that it put me in a bad mood. This does tie up the series nicely though and I'm actually glad that it was the end of the series. I already have a copy of the first book in the spin off and I'm really hoping that Prudence's story won't have the issues that irritated me with this book. I'm sad that the final books in this series didn't live up to my expectations but I do enjoy this author's writing style so I'm willing to give her another chance.