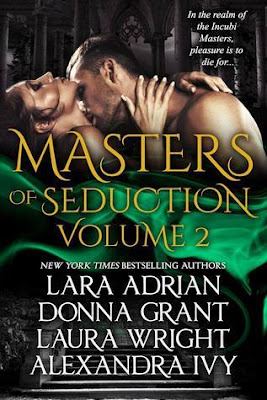 PRICELESS: House of Ebarron ~ by Lara Adrian
Incubus Master Sorin Ebarron has an insatiable taste for fine things. So when a tantalizing platinum-haired Nephilim walks into his elite casino on the arm of a rival male, Sorin is determined to have the beauty at any cost. But Ashayla is waging her own high-stakes gamble, willing to risk breath and body to win the prize she seeks. Caught in a game of deception and desire, Sorin and Ashayla will discover a secret that may hold the power to shake the gates of both Heaven and Hell...

BOUNDLESS: House of Drohas ~ by Donna Grant
As Master of the House of Drohas, Javan has a personal stake in his family's art business. The enigmatic Incubus has never embraced that duty more than when a beautiful and talented new artist catches his eye. The Drohas name and influence can help Naomi's career, but she's interested in Javan for a different reason. Believing him to be her sister's killer, Naomi soon finds herself fighting an all-consuming desire for the dangerous man, and thrust into a world she never dreamed existed--a world of angels and demons, poised at the brink of a brewing war.

DAUNTLESS: House of Trevanion ~ by Laura Wright
Incubus Casworon Trevanion likes his nights long and his bed full. But as his House's new Master, Cas's love of demon debauchery is over. Like every royal male before him, Cas's mate has been chosen and will be presented to him at the annual Seafarer's Ball. But when Cas sets his eyes on lovely stranger, Lia, all bets are off. He is meant to possess her. But will he discard his legacy when he realizes the female he desires is none other than the scarred servant who scrubs his floors?

RECKLESS: House of Furia ~ by Alexandra Ivy
Tiege never expected to become Master of Furia, not until his brother's mate was kidnapped and brutally killed. With his House in mourning, Tiege has no choice but to lead, although that doesn't halt his hedonistic lifestyle. Sloane is a former Nephilim Blade who is dedicated to duty. She has nothing in common with the reckless Incubus--except a dangerous passion. But it's that passion they must draw upon in order to raise the spirit of a long-dead Succubus whose stunning revelations could topple the Obsidian Throne forever...

For more information about any of these authors you can visit their websites by clicking the links below:
Lara Adrian
Donna Grant
Laura Wright
Alexandra Ivy

Review:
This is the second volume in the Masters of Seduction multi-author series containing stories by Lara Adrian, Donna Grant, Laura Wright and Alexandra Ivy. Although each novella in the series features a different main couple there is an overarching plot that carries across the whole series so I would recommend reading both volumes in order to get the most out of the reading experience.

Priceless - Lara Adrian
Sorin is the Master of Ebarron and in control of the family's assets so when he is contacted by a young woman who wants to buy back one of the treasures they have purchased he isn't willing to let it go. Ashayla will do anything to get back her family heirloom, it's her grandmother's dying wish to have it back so she doesn't have much time to work with and she sets out to Sorin's casino with a plan to steal it. Unfortunately for her things don't go quite to plan and it might cost her more than she could ever have dreamed of to get back her grandmother's pendent. This was such a fun story, I loved how determined Ashayla was and really enjoyed the banter between her and Sorin.

Boundless - Donna Grant
Naomi knew nothing of the supernatural world until her sister was murdered by an incubus, now after reading her sister's diaries she has a suspect and she is determined to make sure Javan pays for his crime. Javan isn't a murderer but he is the Master of Drohas and since Naomi's sister was one of the artists that his family sponsored he is just as keen to find out who killed her. The pair have to work together to find out what really happened and the sparks are soon flying between them. Another enjoyable read and I though they were a really cute couple.

Dauntless - Laura Wright
Cas may love to party and have fun but as Master of Trevanion he knows it is his duty to mate into a well connected family. His mother is determined to see him with someone who will help secure the family's link to royalty and she doesn't care whether Cas likes his intended mate or not. Then at the ball where is mating should be announced he spots a beautiful stranger and his life is turned upside down. This sweet and hot story was definitely my favourite in the anthology (that's 2 out of 2 for Laura Wright!), it's a Cinderella retelling which is probably one of the reasons I loved it so much, I'm a sucker for fairytales!

Reckless - Alexandra Ivy
Tiege is a play boy who loves nothing more than partying but he's had to step up and take over as Master of Furia after the death of his brother's mate. He isn't going to let his new role stop him from having fun though. Sloane is a former Nephilim Blade who has spent her whole life putting her duty above everything else. The two of them should be like oil and water but when Tiege is desperate to feed and Sloane is the only one available to help him the passion that flares between them is surprisingly hot. I enjoyed the connection between these two, I loved how noble Sloane is and it was fun to see Tiege's heart captured.

Masters of Seduction is an enjoyable anthology of short but hot reads by some fantastic authors. As much as I would have loved for these stories to be longer so that more time could have been spend developing the different relationships if you're in the mood for something quick but satisfying then I'd recommend checking out this series.