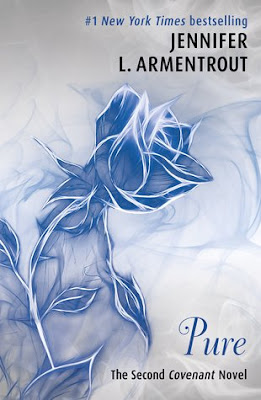 For Alexandria, being destined to become some kind of supernatural electrical outlet isn't exactly awesome - especially when her 'other half' is everywhere she goes. Seth's in her training room, outside her classes, and keeps showing up in her bedroom - so not cool. Their connection does have some benefits, like staving off her memories of the tragic showdown with her mother, but it has no effect on what Alex feels for the forbidden, pure-blooded Aiden.

When daimons infiltrate the Covenants and attack students, the gods send furies - creatures determined to eradicate any threat to the Covenants and to the gods . . . and that includes Alex. If that and hordes of aether-sucking monsters weren't bad enough, a mysterious threat seems willing to do anything to neutralise Seth, even if that means forcing Alex into servitude . . . or killing her.

When the gods are involved, some decisions can never, ever be undone.

Review:
I really don't know how to review this book. Do I review it as a fan of Vampire Academy who is annoyed at the HUGE number of similarities between the two series? Or do I review it as an impartial reader who was just bored by the amount of relationship drama in this book? No matter which way I look at it I was incredibly disappointed by Pure which is a shame because I usually love anything by Jennifer L Armentrout. She just has a writing style that I find incredibly easy to read and she usually sucks me into her stories very quickly but that definitely wasn't the case here.

I mentioned the similarities with Vampire Academy in my review of Half-Blood but I picked up this novel really hoping that the story would go in it's own direction, there was definitely enough hope of that to make me excited to read this book. Unfortunately I think if you just edited out Pures, Halves and Daimons for Moroi, Dhampirs and Strigoi you pretty much have the exact same story. From Rose sorry Alexandria's obsession with the forbidden full blood (who happens to be her trainer!) Dimitri *cough* Aiden, to her attraction to Adrian, sorry Seth (who she has a bond with that is very, very similar to Rose's connection to Lissa in VA), right through to the disaster that befalls Mason, oops I meant Caleb, these books are basically the same. How the hell does that happen? It just completely boggles my mind!

As if the blatant copying wasn't bad enough (and trust me it REALLY was!) this book was just damn boring. All that really happens is that Alexandria moping about because she's not allowed to be with Aiden, she becomes attracted to Seth just because he's there, there is a lot of sitting around waiting for the council to decide what to do with her and very little action until the very end. Even the furies promised in the blurb remain stubbornly stone statues for the majority of the book. Yes, the last couple of chapters were dramatic but by that point I'd practically given up caring about anything and had come incredibly close to DNFing the book on multiple occasions.

Now I find myself feeling torn, I've been assured that this series does go in it's own direction in future books and I'm kind of curious to see whether that's true or not but is there any point in reading more of a very watered down and sub-par copy of Vampire Academy (which happens to be one of my favourite series) or should I just quit while I'm behind? If you've read both of these series I'd really appreciate your opinion on whether it's worth continuing or not - I already have the rest of the series so I wouldn't have to spend more money to try but I value my time and my sanity too much to waste it.