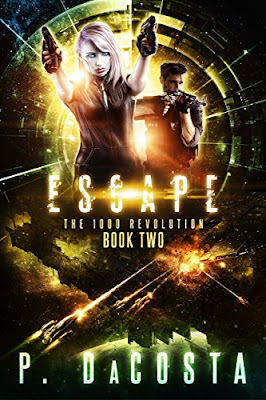 "There’s no quicker way to get yourself killed than trusting someone in the black." ~ Caleb.

Caleb Shepperd knows Fran has her own motives for helping him escape prison, but he’s not about to let a little thing like past betrayal stand in the way of his next paycheck. Until he’s forced to meet with the sexy and psychotic pirate, Adelina Cande. They’ve met before. When he seduced her, cleared out her credit account, and left her for dead in-the-black.

Caleb figures Adelina holds a grudge when she plants a bomb on his ship and demands he steal a fleet freighter for her, that is, if he ever wants to fly again. Get him drunk enough and he’ll try anything once, but this time, he has to balance his own greed, with the needs of a vengeful pirate and the scheming of his dubious second-in-command, Fran. What could possibly go wrong?

In the heart of Chitec headquarters, #1001 enlists an eager young technician to aid in her escape. But it’s not freedom she wants. It’s revenge. The memories of a life that don’t belong to her demand she finishes what she started. She believes she killed Caleb, now she's targeting Chitec CEO Chen Hung, and not even the hopeful technician can dissuade her.

She thought she knew the truth.

Review:
After thoroughly enjoying the first book in this series I couldn't wait to dive back into this world and spend more time with Caleb and #1001. The story picks up not long after the last one ended, #1001 has been caught by Chitec and is about to be decommissioned, she believes that she murdered Caleb and although she was only carrying out orders she feels very conflicted about what happened. When a lab technician agrees to help her escape #1001 knows this is her last chance to make her father suffer for what he did to her and she will do whatever it takes to get her revenge.

Meanwhile Caleb has also been captured and he is struggling to survive on an inhospitable prison planet. His second in command, Fran, may have come to his rescue but Caleb knows that she can't be trusted and the deal she made with a pirate family to save him has ended up dumping him out of the frying pan and into the fire.

If you thought these characters made questionable choices in the first instalment you've not seen anything yet, they all have their own agendas and loyalty is a word that most of them don't know the meaning of. Any alliances they make are fleeting and only last until a better offer comes along so no matter what kind of friendships you think they have you can never be quite sure that their bonds will last. It's just so much fun to read about characters who are so morally ambiguous, I may not always agree with their choices but Pippa DaCosta always does a good job of making their decisions believable.

Caleb is a loveable rogue and I just can't resist him. He's not a good guy, in fact he does some truly horrible things, but he does have his own code of honour and he never claims to be something he's not. #1001 is probably my favourite though, she thinks of herself as completely inhuman but from her thoughts and actions it's obvious that deep down inside her human side is still very much in control. She longs for revenge against the people who wronged her but she also craves friendship and wants something more from life.

I really don't want to say too much about this story apart from to warn you to expect the unexpected. Nothing is what it seems and there are plenty of twists to keep you guessing. I have absolutely no idea where the story will go from here but I do know that the next instalment will be jumping to the top of my to read pile the minute I can get my hands on it!