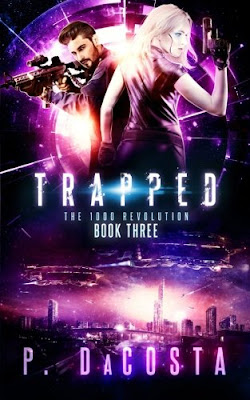 "When are you going to stop running, Caleb?"

Taking the synth to the casino capital of the nine systems seemed like a great idea at the time, but as Caleb Shepperd's many enemies close in, he only has one way out. He must betray #1001.

Caleb can't make the same mistake twice. Can he?

#1001 has a price on her head. The Fenrir Nine and Chitec will stop at nothing to secure her secrets. The very same secrets that riddle her synthetic mind with faults.

Her systems are failing.

And the one man she's come to trust may prove to be her enemy.

Review:
I find it really, really difficult to write reviews for the books in this series because they're so amazingly good that I struggle to find the words to talk about them. I know there is no way to do Girl From Above: Trapped justice but I'll do my best to give you full sentences rather than just a whole page of "Read it! Read it! Read it! Read it!"

Every time I think things can't get worse for #1001 Pippa DaCosta proves me wrong, considering that nobody is supposed to know she even exists she's actually become the most wanted synth in the system. She's travelling with Caleb but they're out of luck and running low on credits. Caleb comes up with the idea to scam the casinos on planet Lyra hoping that with #1001's memory they'll be able to earn more than enough to make their escape. Unfortunately he didn't consider the possibility of running into old enemies and now he's in serious trouble. It looks like his only option is to betray #1001 and sell her off to the highest bidder. Caleb has made a lot of bad decisions in his life but can he bring himself to give #1001 to her enemies for a second time?

I want to talk about how much I love these characters, none of them are good guys - you'd see Caleb's picture next to the word anti-hero if you look it up in a dictionary - but they're all fascinating and so multidimensional. You may not always agree with the decisions that they make but you'll be able to understand why they made them and if you're anything like me you'll find yourself rooting for them almost against your own common sense. Throughout the series we've seen a lot of changes in Caleb, #1001 brings out the best side of him but even that may not be enough to save her. For her part #1001 is becoming more human in her reactions to things but at the same time she is still very "other" and her system is getting close to shut down thanks to the multitude of faults in her processor. It was really interesting to see her start to differentiate more between the memories that belonged to Haley and the ones that are part of her new programming, she is starting to mesh the two sides together and become something that is completely unique.

I'm not going to talk about the plot but if you've ever read anything by Pippa DaCosta you should know to expect the unexpected. If you're a fan of this series you'll also know to expect betrayal and deceit, lots of action, shocking twists and probably a little heartache. I honestly have no idea what to expect from the next, and final, instalment but I absolutely can't wait to get my hands on a copy of Girl From Above: Trust. This has become a favourite series and I'm desperate to see all my favourite characters get exactly what they deserve!