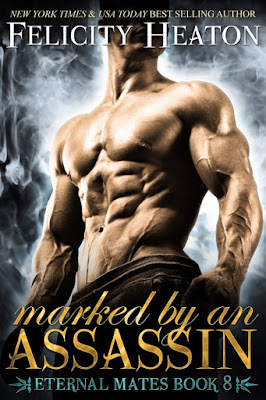 A snow leopard shifter exiled from his pride twenty years ago, Harbin treads the dark path of life as an assassin, driven by a hunger for vengeance, mercilessly hunting the Archangel members who attacked his kin, murdering his mother and sister.

When a new contract comes in and the mark is a snow leopard shifter, he can’t resist venturing into the mortal world on a personal mission to find out why one from a normally peaceful species now has a price on their head. What he finds in a rundown nightclub isn’t quite what he expects—a beautiful snow leopard female that awakens a fierce hunger inside him.

Aya has spent seventeen years living in London, immersed in the underbelly of the fae world, keeping her head down and her tail out of trouble. But when trouble walks right into her life in the form of a sinfully handsome, dangerous assassin, she is pulled into a whirlwind of events that stir up the nightmares of her past but might just give her a shot at putting those ghosts to rest—if she can resist the dark allure of a male she knows is her fated mate.

Can Harbin and Aya resist the passionate fire that blazes between them as they chase the vengeance they both crave? Or will they surrender to their deepest desires?

Review:
I'm a huge fan of the Eternal Mates series, I've been reading Felicity Heaton's books for a long time now & I always eagerly await each of her new releases so I was excited to get my hands on Marked by an Assassin. Unfortunately this book just didn't work for me as well as I expected it to, it's not a bad story by any means but it didn't live up to my expectations and I think it was the weakest instalment of the series so far. That could partly be down to the fact that we didn't know either of the two main characters, Harbin is Cavanaugh's brother and his name sounded familiar but I don't recall much about him from previous instalments and I'm pretty sure Aya is an entirely new entry to the series. I'm all about new characters to keep a series fresh but there are so many character's that I'm already invested in and desperately waiting to read about that this book felt a little bit like a filler.

I actually liked both of the main characters, Harbin and Aya have a complicated history that goes back to a horrific attack on their snow leopard pack years ago. Harbin was conned by an Archangel huntress into giving them his pack's remote location and Archangel destroyed the entire village murdering most of the women and children and taking the survivors prisoner. Aya survived the massacre only to be taken captive and she spent years being tortured and tested on by Archangel. They told her that Harbin willingly betrayed the pack and she has spent years blaming him and planning her revenge. Harbin on the other hand has spent his time searching for the huntress who was really to blame and he will do anything to make her pay for what she did. Aya has every reason not to trust Harbin and he is absolutely convinced that he doesn't deserve happiness after his actions caused so much pain and suffering so their relationship isn't going to be straightforward but if they want to track down the people who are really responsible for what happened then they're going to have to work together.

I enjoyed seeing Harbin and Aya reconnect and it was good to see them work through their issues but I think I would have liked a little more discussion between them about what had happened. The same goes for the first time Harbin and Cavanaugh meet since the night their pack was destroyed. I was pleased with the way Cavanaugh welcomed his brother with open arms but think they needed to actually talk about what happened rather than just push it to one side. Especially since it was something that was constantly on Harbin's mind, to the point where his internal monologue started to irritate me. I was also a bit disappointed by the backwards direction that Archangel seem to be taking, we all know that the association has done some horrific things in the past but I thought they'd started turning a corner now. I think the time line of this story might coincide with one of the earlier books though so that could be what caused the confusion for me.

Like I said Marked by an Assassin wasn't a bad story, Harbin and Aya make a cute couple and the sex was definitely hot but I wanted a bit more depth to their emotional connection and to see them really start to put the past behind them. I think I just have high expectations for this series and this one fell a little short of the mark. I'm still very eager to read the next book though and I'll definitely continue to stalk Felicity Heaton's new releases!