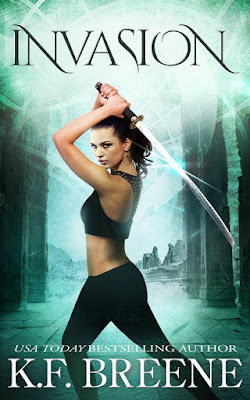 With the title of Chosen secured, Shanti and Cayan must look to the next steps in ripping back their freedom from the most deadly tyrant in the land. Unfortunately, they aren’t the only ones with an agenda.

Without mental power to defend themselves, the Westwood Lands are trapped within their own walls. Under the threat of torture and eventual death, a new power rises.

To be discovered will mean death. But doing nothing is not an option.

Review:
This series has quickly become one of my favourites so I couldn't wait to get my hands on a copy of Invasion. I was a little nervous in case it didn't live up to my expectations but I needn't have worried because K.F. Breene smashed them. The series is going from strength to strength and I loved every minute of this book.

Shanti and Cayan may have won the respect of the Shadow people and have added some incredibly skilled new fighters to their army because of it but the real battle is only just beginning and it's now time to face the Hunter once more. While they've been busy on the island the Hunter has been getting into position and now he's taken Cayan's city by force and is using the people Shanti and Cayan care about to force them into doing what he wants. Neither of them are characters who will give up without a fight but now they're in the difficult position of trying to defeat their enemy without getting an entire city full of hostages caught in the crossfire.

As much as I love this series I've always been more than a little irritated by the attitude of the guys in Cayan's army. They think of women as the weaker sex who need to be coddled and protected and I've never liked that about them. Shanti has been working hard to change their opinion and while they may have finally realised that she is as strong as the best of them (the fact she's constantly wiping the floor with them has probably helped with that!) they still think of the women from their own city as pretty much helpless. Sometimes it can be an advantage when women are underestimated though and in this case the Hunter is making the same mistake as Cayan's army always has. The city is under siege but it's only really the men who have been imprisoned and who are being closely monitored. The Women's Circle have been staying under the radar but secretly plotting and have put plans in place to rescue their men folk. I absolutely loved seeing Shanti and the Women's Circle in action, these ladies are more than capable of protecting their own and they prove it a thousand times over. Cayan and the rest of the men are going to have no choice but to accept that now and I'm really looking forward to seeing how this changes the dynamics as the series continues.

Invasion is full of action, the plot pretty much never allows you time to breathe because the characters are going from one battle to the next and facing up against more difficult odds than ever. We also get to meet a whole group of new characters, not only are we getting to learn more about the Shadow warriors but we finally get the chance to meet some of the people from Shanti's homeland. I'll admit I was confused at first because the opening chapter starts from the point of view of a completely new set of characters but once I realised what was going on I was really excited at the chance to learn more about where Shanti came from and to see her through the eyes of her people. I was also slightly disappointed that we didn't see more of Shanti and Cayan working together but the more I think about it the more I'm actually pleased about it - it's good to see that even though they're a couple they're not joined at the hip and that they are still going to play to their strengths even if that means working separately for a while.