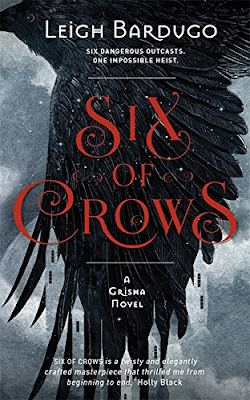 Criminal prodigy Kaz Brekker has been offered wealth beyond his wildest dreams. But to claim it, he'll have to pull of a seemingly impossible heist:

Retrieve a hostage
(who could unleash magical havoc on the world)

Survive long enough to collect his reward
(and spend it)

Kaz needs a crew desperate enough to take on this suicide mission and dangerous enough to get the job done- and he knows exactly who: six of the deadliest outcasts the city has to offer. Together they might just be unstoppable - if they don't kill each other first.

A stunning new fantasy epic set in the world of the Grisha, from the best selling author of Shadow and Bone, Leigh Bardugo.

Review:
I've been a fan of Leigh Bardugo's ever since I discovered her Grisha trilogy so of course I couldn't wait to get my hands on a copy of Six of Crows. I had high expectations going in but I was blown away by how amazing this book was. It's set in the same world as the previous books but if you're new to the author you can definitely start here. Fans will recognise a few nods to the other series but in general this is completely separate and it's actually a very different kind of story to anything we've had from Leigh Bardugo before.

Six of Crows is a heist story, one in which six characters have come together to attempt the impossible. Not only do they have to break into an impenetrable fortress but they also have to release a hostage and get him safely back out again. If they can pull off the challenge they'll earn more money than they could get in a lifetime of honest work but it will mean putting their lives at risk and trusting the rest of the team to each play their own vital role. Kaz may be the leader but he can't do this alone and only Inej, Nina, Jesper, Matthias and Wylan have the unique skills needed to help him pull off the heist of a lifetime.

It's been a long time since I was quite so invested in such a diverse bunch of characters. Kaz is a great anti-hero, nothing with him is quite what it seems and he is constantly at least ten steps ahead of everyone else. His planning skills are second to none and I loved the way he was constantly pulling off the unexpected even though the number of secrets he was keeping was incredibly frustrating for the rest of the team. Nina and Matthias have a very complicated history and it makes things more than a little awkward between them, they're more likely to kill each other before the mission is complete than to actually have each other's backs but I really enjoyed the way we got to learn about their pasts through various flashbacks. They have both done things they're not proud of and they have good reasons not to trust each other but they're going to have to find a way to work together, at least temporarily, if they want to achieve their goals. Jesper added a lot of humour to the group, he's probably the least conflicted character in the bunch but he's loyal and is trusted by everyone. Wylan is a bit of an unknown quantity, as the newest member of the group and someone that none of them have ever worked with before he has to prove his loyalty before he can gain their trust.

As much as I loved all of the characters it was Inej who quickly became my favourite - she's just absolutely brilliant and I couldn't get enough of her. Nicknamed The Wraith, Inej is an expert at sneaking around, her acrobatic skills mean she can get anywhere and you'll never hear her coming. If Kaz needs a silent assassin Inej is the one he sends but she's best at spying and an expert at gathering the secrets of his enemies. Inej puts all other badass women to shame and I don't think there is anything she can't achieve but she's also one of the sweetest characters who has been through some horrific things and I desperately want to see her dreams come true.

I was a little worried at first that it might be hard to keep track of who everyone is, books with this many different points of view can get incredibly complicated, but Leigh Bardugo has given them all such unique voices and made all six of them so three dimensional that I had no problems at all keeping things straight. The same definitely can't be said of Kaz's plans for the heist because that was twist, after twist, after twist and I swear I was on the edge of my seat for the entire second half of the book. You never had a clue what would be thrown at the characters next and I was genuinely concerned that not everyone was going to survive the mission. The first half was a little slower as it introduced each of the characters and laid all the groundwork for what was to follow but I was never bored and I loved every minute of it.

Speaking as a Leigh Bardugo fan girl I would definitely say that this is her best book yet, I love the Grisha trilogy but this is on a whole new level and epic doesn't even begin to describe Six of Crows. It was marketed as Oceans Eleven meets Game of Thrones and it lives up to the hype, it's fast paced, witty, clever and the characters are absolutely fantastic. The first instalment of a duology Six of Crows doesn't answer every question but it doesn't end on a cliffhanger and you will find out if they can pull of their heist or not. The sequel, Crooked Kingdom, is now at the top of my wish list for 2016 and I can't wait to spend more time with these characters!