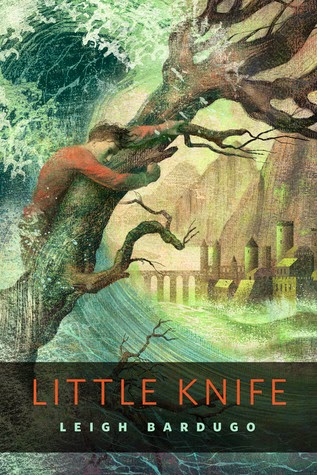 In this third Ravkan folk tale from Leigh Bardugo, a beautiful girl finds that what her father wants for her and what she wants for herself are two different things.

It is a companion story to the third book of the Grisha Trilogy, Ruin and Rising, and the stories “The Witch of Duva” and “The Too-Clever Fox.”

Review:
Little Knife is the third free short story that Leigh Bardugo has written for the Tor website (you can find it here) and it's just as good as the others. These stories don't feature characters from the Grisha series but are in fact Ravkan fairytales that would be told to young children by their parents.

This is the story of a young girl who is so beautiful that everyone who looks at her face falls madly in love with her. Even when she was a baby servants tried to steal her but now she is a teenager men are willing to fight to the death for the chance of winning her heart. I'm not going to say much more but the story has great themes and remind readers to be careful what they wish for!

These little freebies are a great way of testing out the author's writing style and for fans of the series they just add even more depth to the world building in the main books. This is one of my favourite series and I can't recommend it highly enough but you can read the short stories (The Witch of Duva, The Too-Clever Fox and Little Knife) in any order whether you've read any of the full length novels or not.