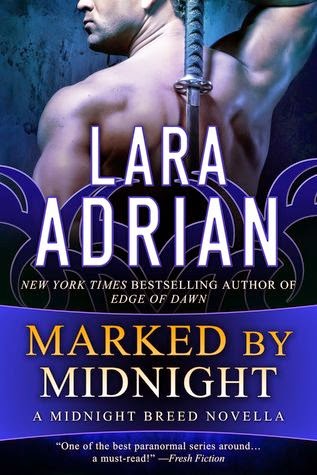 Determined to solve a string of brutal slayings in London, vampire warrior Mathias Rowan is forced to seek the help of Nova, a fiery tattoo artist who ignites an unexpected, yet undeniable, passion in the grim Order enforcer.

Nova’s shadowy connections and dark talents may be Mathias’s best hope of unmasking a treacherous enemy . . . but falling for a woman with her dangerous past will risk both their hearts and their lives.

Review:
I'm a huge fan of Lara Adrian's Midnight Breed series, it was the first paranormal romance series I discovered and I've even got a Breedmate mark tattoo so you could say I'm a little obsessed with these books. It's felt like a very long wait between the last two books but I was able to dive straight back into this world without any problem. Fans of the series will already be familiar with Mathias and remember him working alongside the Order in Boston and I was really pleased we were going to finally get to see him find his happily ever after.

Mathias is now living and working in London where he runs the local branch of the Order, he still reports directly to Lucan but he also works alongside JUSTIS (the Joint Urban Security Taskforce Inititaive Squad) a human and Breed law enforcement group. JUSTIS are investigating the murders of several gang members and Mathias has offered to help them discover who is behind the killings. His investigation leads him to a tattoo shop where he finds Breedmate Nova working as a tattoo artist. He knows immediately that Nova isn't telling him the whole truth but what he isn't sure of is whether she is innocent and just scared or whether she is guilty and trying to hide it from him. He is determined to get to the bottom of her secrets and the closer he gets the more he starts to realise how special she is.

I enjoyed Marked by Midnight but it is a fairly short novella so you have to be prepared for Mathias and Nova's relationship to progress at quite a rapid pace. This doesn't usually bother me as much in paranormal romance, especially not in novellas, but I have to admit that even I found the declarations of love came a bit too quickly and that made them slightly less believable. I think I would have preferred things to have been left more open ended or for there to have been an epilogue set a few months after their first meeting to tie up their love for each other.

I've always liked Mathias, he's a man with principles who is very protective of those who fall into his circle. He is quick to add Nova to the list of people under his protection and nothing will stop him from looking out for her, even if it means keeping things from the Order which goes against everything he's ever believed in. It was interesting to see him a bit unsure of himself, he's not used to feeling that anything is more important than his brothers in the Order so it throws him off balance when he starts to care for Nova. As for Nova I thought she was a really interesting character, we are given hints of some terrible things that happened in her childhood and I would have really liked to see this as a full length novel so we had more time to delve into her background and really get to understand her. I liked her character, she's spunky and very capable of standing up for herself but I felt she let Mathias get close a little quickly considering what we know about how she was treated by other Breed males in the past. Extending the story would have given more time for her to get to know him and for Mathias to slowly earn her trust.

Marked by Midnight is a fun instalment to the series, it's nice to get out of Boston and visit London for a change and I'm hoping we might see more of Mathias and Nova in future instalments to the series. I think fans of the series will enjoy this story and it's definitely whet my appetite for the next full length book, Crave the Night.