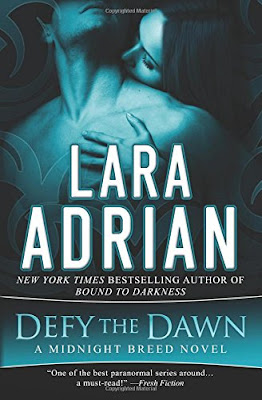 Daywalker Brynne Kirkland survived a hellish upbringing as a product of a madman's lab. Tough, driven, and devoted to her work in law enforcement, Brynne has never dared to risk opening her heart to anyone - least of all a handsome immortal from a world on the verge of war against hers.

Atlantean warrior Zael left the intrigue of his realm several lifetimes ago, along with the battles he fought as one of the queen's legion. As a free-spirited loner walking the fringe of two worlds - that of his secretive and powerful people, and the outside world belonging to mankind and the Breed - it was never his intention to return to combat and bloodshed. Nor had he imagined that he might ever be tempted into anything stronger than desire . . . until he meets Brynne.

Thrust together as allies of the Order in the fight against a diabolical enemy, Zael and Brynne embark on a mission that will ultimately force them to decide between duty to their people, and a passion that defies all bounds.

Review:
There aren't many authors who can keep a series fresh and exciting for 14 books (and 6 novellas!) but Lara Adrian is one of them and I'm loving the Midnight Breed series more than ever. The series is constantly evolving and the world building has expanded so much in the last few books since the human population have been made aware of the Breed's existence. They aren't the only ancient race though and it looks like the queen of the Atlanteans is also planning on making a comeback so things are about to get even more interesting.

Zael is a warrior who left the Atlantean realm centuries ago, he knows his queen has started to lose herself to madness and he has worked hard to help the colony of escaped Atlanteans remain hidden from the queen's guard as well as from the Breed and humanity. For centuries the Atlanteans fought the Ancient beings that were the forefathers of the Breed but Zael has seen first hand that members of the Order are very different from the beings who sired them and he's become friends with several of the Order's warriors. Opus Nostrum have increased their terrorist activities and are trying to cause chaos between the Breed and humanity but the Order can't afford to be too distracted because the Atlantean queen is also making threats so they're facing enemies on all sides. They are in desperate need of allies and they have asked Zael to step in and try to build ties with the colony of escaped Atlanteans.

Brynne was created in a madman's lab and spent her childhood being experimented on and tortured. She has never opened up to anyone about the ordeal she suffered or the long term effects that they had on her. She only recently discovered her half-sister Tavia and was welcomed by the whole Order but she doesn't really know how to be part of a family and always holds herself at a distance. She is just too afraid to let anyone close to her because she's terrified they'll discover her darkest secret and no matter how attracted she is to Zael she knows there can be no future for them. Zael isn't one to be put off so easily though, he sees through Brynn's prickly exterior and wants nothing more than to get to know the woman hidden deep inside. There is no denying the sparks that are flying between them but Zael is going to have to work hard to convince Brynn they have something worth fighting for.

I absolutely loved these two, they have so much going against them from the start but Zael is determined not to give up and it's not hard to understand why Brynn finds him so hard to resist. Her whole world has been turned upside down thanks to Opus Nostrum but she wants to do something meaningful so she agrees to help Zael liaise with the colony on behalf of the Order. I've been wanting to know more about the hidden Atlanteans ever since we first met Zael in the previous book and this is the first chance we've had to get a proper look at them. We're introduced to some interesting new characters and I think we've only just touched the surface of the group's abilities so they're definitely going to bring a lot to the series over the next few books. Along with the fabulous romance we get a chance to catch up with some of our favourite original characters from the series and I'll never have enough cameo appearances from people like Lucan, Gabrielle, Gideon and the others. I love this world that Lara Adrian has created and I can't wait to see where she takes the story next.