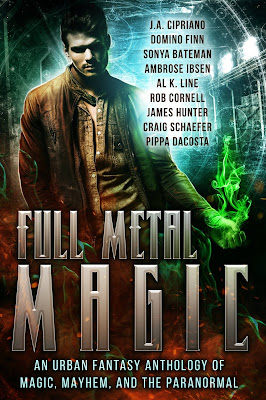 This Urban Fantasy collection contains 9 EXCLUSIVE stories that will bring you face to face with unique characters, alternate worlds where magic is commonplace, and things that really do go bump in the night.

Journey from Las Vegas to Wales and everywhere in between to face off against witches, shapeshifters, mercenaries, bounty hunters, zombies, and even a few gods.

Review:
Anthologies like Full Metal Magic can be a great way to try out a whole bunch of new authors and potentially add a huge number of books to your to read pile (you'll probably find yourself hooked on 9 new series by the end of this one so be warned LOL!). My main reason for wanting to read this anthology was for the Soul Eater short story by Pippa DaCosta, she's the only one of the authors that I'd read before and I'm a huge fan of her work so I'd recommend this book for that story alone but I was excited to have the chance to try out so many new authors too.

Overall this anthology includes a great mix of different supernatural creatures and magical abilities, the stories are varied and fun and it's ideal to dip in and out of because you can easily finish each one in a single sitting even if you don't have much time free. At the current price (£0.99/$0.99) it's a total bargain and a great way to test out a whole bunch of authors to decide which series you're interested in continuing.

I'm including the official blurb for each short story below followed by my thoughts about them all just to give you a bit more information about what to expect from the anthology:

THE BULL DEMON KING by J.A. Cipriano - Mac Brennan just wanted to take his girlfriend to the fair, but the Bull Demon King had other plans...

This is part of the Thrice Cursed Mage series but I'm not sure where it fits into the timeline. This is a fast paced short story with plenty of action but I have to admit I didn't love Mac's voice. He goes on and on about how hot is girlfriend Ricky is but seems to think the fact that she's a werewolf who is the alpha of the entire state is hardly worth mentioning. The banter between them was missing something and I'm not sure if they're in a new relationship but they hardly seem to know each other and I didn't really feel the chemistry between them. This wasn't bad for a short story and I'll still try the series at some point (especially since I already own the first book) but it didn't leave me desperate for more.

THE BLACK DOOR by Domino Finn - Cisco Suarez is dragged to the depths of the underground Miami nightlife, where seekers of arcane knowledge may just get their wish.

Part of the Black Magic Outlaw series, again no idea where it fits in the timeline. I enjoyed this story much more than the first one, mainly because I really liked Cisco's voice. This story was cleverly plotted with a nice twist that I didn't see coming (it may have been more obvious if I was familiar with the series but it was still cleverly done) and it definitely left me wanting to read more in this world.

DANCE OF THE DEAD by Sonya Bateman - Halloween in Manhattan gets weirder than usual for Gideon Black, who finds himself up against a powerful necromancer looking to raise a lot more than the dead.

This is part of the DeathSpeaker Codex and takes place just after events in book 1, Wrong Side of Hell. Gideon is fairly new to the supernatural world, he only found out about his half-fae heritage recently and is still learning to use his rare ability as a DeathSpeaker but he puts it to good use in this short story when he comes up against a necromancer. This was a fun Halloween themed story and it added another series to my wish list.

HARD ROW by Ambrose Ibsen - Demon-hearted brawler Lucian Colt prepares to trace a human trafficking operation to its fountainhead. But will he and his teammates prove a match for what awaits them in the seedy stretch of Hard Row?

Part of the Demon-Hearted series but where it fits into the timeline is unknown. This was another story I enjoyed enough to want to carry on reading the series (this anthology really was bad for my poor to be read mountain!). Lucian was an interesting character, he was given a demon heart in a transplant after being attacked by witches and it's given him some unusual abilities that he puts to use working for a supernatural type of police agency. This story sees him go up against werewolves who have been trafficking children to the underworld.

ANGRY SPARK by Al K. Line - When an old vampire "buddy" calls you in the middle of the night, and asks for a favor, hang up on the them and stay the hell in bed. I was stupid. I got dressed, and nearly got dead soon after.

Part of the Dark Magic Enforcer series but again I'm not sure where it fits into the timeline. Unfortunately this was my least favourite story in the anthology, it's probably a personal thing but I just really didn't like the fat-shaming that was going on. The main character Faz gets a call from an old friend who is in some kind of trouble, from the beginning we're told how fat his friend is and how weird that is for a vampire since they normally look after themselves. Then we get a lot of awful descriptions of the friend's floppy skin because he's lost a lot of weight in a short space of time (thanks to being cursed) and finally the friend recovers and we're supposed to be amused that he's now ginormous again. Like I said that's probably a personal issue that might not bother other readers as much but frankly I found it offensive and it doesn't leave me with much interest in reading more from this author.

FAMILY BUSINESS by Rob Cornell - Sorcerer Sebastian Light expects his first day as a demon hunter to go off without a hitch, but sometimes family issues are harder to slay than even the surliest of goblins.

This is part of the Unturned series, I think it's a prequel but I can't be 100% certain of that. Sebastian is a sorcerer who has only just got his demon hunting license but his first day on the job definitely doesn't go to plan when he realises his target might not be guilty of committing all the crimes he has been accused of. The real question is should Sebastian just blindly follow orders or should he trust his gut and go with his instincts? I think this was probably the funniest story in the anthology and it definitely left me wanting more.

VALENTINE BLUES by James A. Hunter - As violence breaks out and people start dying, only Yancy Lazarus--bluesman, gambler, mage, and former wet-works man--can put things right. Well, he can try...

Part of the Yancy Lazarus series but I'm not sure where it fits into the timeline. This was a retelling of the Pied Piper which was unusual and made it memorable. It wasn't quite long enough for me to get to know the main character very well but I like what I've seen so far and wouldn't mind carrying on with the series.

A DRIVE IN THE COUNTRY by Craig Schaefer - For Daniel Faust, driving a condemned man to his death dredges up old memories and old ghosts. You can't outrun the past.

Part of the Daniel Faust series but I'm not sure where it fits into the timeline. I have a lot of friends who love this series so apart from Pippa's story this was probably the one I was most interested in reading. I wanted to see if it lived up to the hype and I'm happy to say that it did and it's made me more eager than ever to read the rest of the series. I have a feeling I'm going to love Daniel, I definitely loved the story he told here and the way he got his revenge on someone from his past. 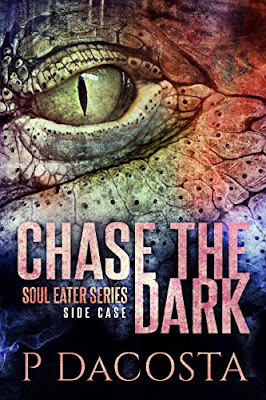 CHASE THE DARK by Pippa DaCosta - New York's sewers are infested with gators. As Ace Dante investigates, it becomes clear there's something far worse beneath the streets, and it's out for revenge.

Part of the Soul Eaters series, will work well as an introduction to the series but technically fits into the timeline after the second book, Witches' Bane. Obviously this story was the whole reason I wanted to read the Full Metal Magic anthology. I absolutely love this series, it's full of crazy Egyptian Gods roaming modern day New York and causing mayhem for poor Ace wherever they go. This story introduces us to Sobek, the Egyptian God of Crocodiles (among other things) and he's been rather busy in the sewer system underneath Manhattan creating a hoard of mutant crocodiles that he's planning to unleash aboveground. It's up to Ace, and his trusty demon sidekick Shu, to try and stop him but Sobek and Ace have history and things are about to get complicated. Another fantastic story from Pippa, definitely my favourite of the anthology (no surprise there!) and it's left me eagerly waiting for the next instalment of the Soul Eaters series.