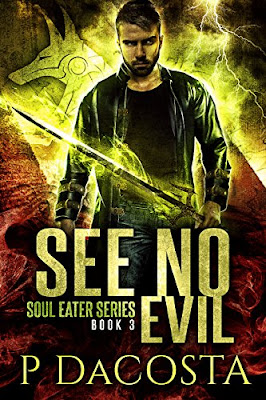 “Wanted dead or alive sounds like a lot more fun when it’s not my head on the block.”

Word is out, the soul eater has gone rogue and not even the might of Osiris can stop him. Or so everyone believes. That would suit Ace just fine, but after he narrowly escapes an assassination attempt, he knows it’s just a matter of time before those around him end up in the crosshairs of the gods.

After 500 years on earth, it’s time for Ace to go home. Little does he know, the underworld is hungry for revenge, and what awaits him in the Halls of Judgment could be far worse than any fate on Earth.

The thrilling Amazon bestselling series is back with a whole load of action, bad-assery, and psychotic gods.

Review:
It's absolutely no surprise but Pippa DaCosta has done it again, this series is going from strength to strength and I am totally addicted! You just know that Pippa has it in for her main characters when she sends them on a holiday to the Hamptons, there is no way Ace, Shu and Cat are just going to be allowed to party at the beach for an entire book so it's no surprise that trouble follows fast on their heels leaving a trail of death and destruction behind it. A seaside holiday turns into something else entirely when Ace and Cat find themselves transported to Duat, the land of the dead that is Ace's homeland and somewhere he was exiled from 500 years ago.

What I love about this series (and all of Pippa's books) is the way she excels at world building, we've seen Ace in New York and we've had a short visit to Duat before but this is the first time we get to properly explore it and meet some of the creatures that Ace grew up surrounded by. The rules in Duat are very different to here on earth and unless they tread carefully Cat could end up losing her soul. Throw in a group of vengeful gods who want to make Ace pay (both for crimes he did commit and ones he didn't) and they're in for a bumpy ride.

See No Evil was definitely my favourite instalment of the series so far - the setting was fabulous, the action kept me on the edge of my seat and there was so much growth in the characters. Shu is totally badass with a gooey centre that only gets exposed in the exact right conditions, there's more to Cat than we originally suspected and Ace is still a loveable rogue with a scary bad side. Don't even get me started on the crazy Egyptian gods, they're all brilliant at twisting things to their own advantage and the games they play with each other just put Ace and the others in more and more danger. The stakes are definitely getting higher and I can't wait for the next instalment to see how Ace is going to deal with the latest revelations.