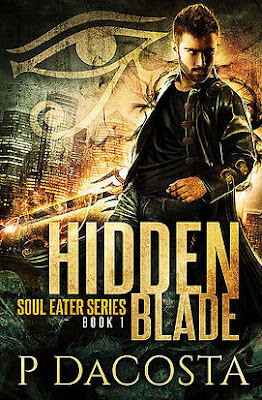 "They call me devil, liar, thief. In whispers, they call me Soul Eater. They’re right. I’m all those things—and more."

Kicked out of the underworld and cursed to walk this earth for all eternity, Ace Dante finds solace in helping others avoid the wrath of the gods.

But when warrior-bitch, Queen of Cats, and Ace's ex-wife, Bastet, hires him to stop whoever is slaughtering her blessed women, Ace is caught between two of the most powerful deities to have ever existed: Isis and Osiris.

And Ace is in their way.

Welcome to a New York where the ancient gods roam.

Review:
I don't know how she does it but Pippa DaCosta consistently comes up with exciting new ideas and Hidden Blade is a breath of fresh air for urban fantasy fans. Egyptian mythology is fascinating but it's actually very underused in UF so I couldn't be more thrilled about this series. Imagine a modern day New York that is actually run by ancient Egyptian gods who are hiding in plain sight. The mayor and his wife? You might not know to look at them but that's Osiris and his wife (and sister) Isis. They've been married for over 3,000 years so even though they're still crazy in love that's bound to put a strain on any relationship!

Our main character Ace, also known as the Nameless One, is a soul eater and, alongside his business partner Shu, he protects the streets of New York from demons and things that go bump in the night. When his ex-wife Bast (AKA Bastet, goddess of cats and protector of the innocent) asks for his help investigating the murders of a group of pregnant young girls who were living under her protection Ace finds himself caught up in something bigger than he could have imagined. Already trapped in the effects of a powerful curse Ace now ends up with an even bigger target on his back and caught between the sights of two vengeful gods.

This is such a hard book to review because I want to tell you how amazing it is but I don't want to give you spoilers. Pippa DaCosta creates such brilliantly multilayered characters and Ace is one of her best. Thanks to his soul eater abilities he's full of darkness and constantly battles between his desires to devour everyone in his path and his hope to become something more, something better. You'll discover the details of his curse for yourself when you read the book but it's certainly a harsh punishment for his crimes and you can't help but root for him even when he teeters on the edge of doing terrible things. The Egyptian gods are as crazy as they are powerful and you definitely wouldn't want them as an enemy.

Hidden Blade is full of action, the author doesn't shy away from sending her characters to hell and back and I'm not going to lie that makes for a gut wrenching read at times. This book will take you through every emotion you can think of and may turn you into an emotional wreck at times but it is so, so worth it. Brilliant world building, fascinating mythology, wonderful multilayered characters that you will either love or love to hate and a fast moving storyline that will keep you turning the pages until the end - Pippa DaCosta most certainly has another hit on her hands and I for one can't wait to get my hands on the sequel!