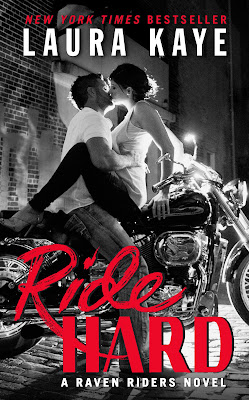 Brotherhood. Club. Family.
They live and ride by their own rules.
These are the Raven Riders . . .

Raven Riders Motorcycle Club President Dare Kenyon rides hard and values loyalty above all else. He'll do anything to protect the brotherhood of bikers - the only family he's got - as well as those who can't defend themselves. So when mistrustful Haven Randall lands on the club's doorstep scared that she's being hunted, Dare takes her in, swears to keep her safe, and pushes to learn the secrets overshadowing her pretty smile.

Haven fled from years of abuse at the hands of her criminal father and is suspicious of any man's promises, including those of the darkly sexy and overwhelmingly intense Ravens' leader. But as the powerful attraction between them flares to life, Dare pushes her boundaries and tempts her to want things she never thought she could.

The past never dies without a fight, but Dare Kenyon's never backed down before . . .

Review:
The Raven Riders aren't quite your average Motorcycle Club, yes they're prepared to cross lines when they need to but they definitely have boundaries and they use most of their money they earn to help protect people. Dare, like most of the MC members, has seen first hand the effect abuse can have on a family and he will do anything to protect the people who turn to him for assistance. The Ravens often rescue women and children from bad situations and get them the new identities and money they need to start over someplace new so they were in the perfect position to help Haven and Cora when they were rescued from the Church gang by the Hard Ink team.

The women were already on the run from Haven's mob boss father when they were captured by the gang and there is a huge reward out for anyone who brings them home so they understandably have no idea who to trust. Haven has led a very sheltered life thanks to her father's overprotectiveness and she's pretty timid and nervy in the beginning. She's wary of being surrounded by so many men and worries about the price she might be asked to pay for their protection but it doesn't take long for Dare and his men to prove that they'd never hurt her or her best friend. I have to admit I was worried that Haven was a little too naive and innocent when she was first introduced but as you get to know her you quickly realise that she has a core of steel. I loved seeing her grow in confidence as she got to know the Ravens and the ending was absolutely brilliant (although I refuse to say why because of spoilers!).

Fans of the Hard Ink series will be familiar with Dare and a few of the other Ravens but it was great to see more of the group and I'm looking forward to spending more time with them. Dare is a brilliant character, someone who is very strong and protective and also surprisingly sweet when he wanted to be. He could be a bit arrogant at times but he was able to man up and apologise when he made a mistake so it was easy to forgive him in the long run. Dare lived through hell as a child and will do whatever it takes to stop others from experiencing the same thing. It broke my heart seeing the way he blamed himself for something that had been completely out of his control but I loved the way Haven broke through his barriers and made him look at things differently. They fit together surprisingly well considering the difference in their ages and world experience but they took the time to really get to know each other so I was totally on board for their relationship.

We've been given hints at a couple of potential future couples and I'm honestly not sure which one I'm more excited about. Cora is going to have a difficult time of it if she sets her sights on the player she seems to be interested in but I think I'm even more curious to see whether Maverick can finally convince Alexa that he's the right man for her. If you loved the Hard Ink series then you're sure to enjoy the Raven Riders just as much and you can keep your eye out for appearances from some of your favourite Special Forces members along the way! If you've not read anything by Laura Kaye before then this wouldn't be a bad place to start but I pretty much guarantee that you'll want to go back to the other series while you're waiting for Ride Rough to release!