Review: On His Knees - Laura Kaye 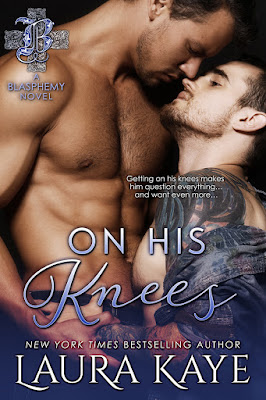 Another failed relationship has lawyer Jamie Fielding confronting the truth—he’ll never be satisfied with any woman until he admits what he needs…to submit and to be used—hard. When a friend invites him to the exclusive Blasphemy club, Jamie is stunned to find everything he ever wanted—in the fierce, ruthless hands of a man.

Psychiatrist Alex McGarry will play with anyone who craves his rough brand of domination, but what he really wants is to settle down. Which makes the submissive male he meets at his club a bad idea—the man might be hot as hell but he’s also new to everything Alex has to offer. Except that doesn’t keep them from coming together again and again, sating every one of their darkest desires.

Master Alex sets Jamie’s whole world on fire and makes him question everything—and that’s good. Because Alex won’t tolerate hiding what they have for long and he wants much more than just having Jamie on his knees...

Jamie and Alex are both fantastic characters and apart from a misunderstanding towards the end that I felt was dragged out a bit more than needed I really enjoyed their story. Jamie desperately wants to find love and settle down but no matter how great the women he meets are he's never found himself completely satisfied in a relationship, especially in the bedroom. He never considered himself either bisexual or a masochist until a friend makes a chance comment but as soon as he starts to think things through he starts to understand exactly what has been missing all these years. His character goes on quite a journey of sexual awakening but it came across as totally natural and I loved the way he was so willing to explore his fantasies and how he was brave enough to go for what he wanted.

Alex is one of the twelve owners and Masters of Blaspheme, he's a Dominant and a sadist who loves to play but is also looking for a long term relationship. He's always made it a rule never to play with inexperienced submissives, especially ones as completely new to the BDSM scene as Jamie, but when he is giving Jamie his introduction to the club their kinks are so closely aligned that it's pretty much impossible to resist. Alex loves being the one to introduce Jamie to the heights of the lifestyle but that isn't all their relationship is about and I appreciated getting to see them spending time together away from the club just talking and getting to know each other better. They fitted together in so many ways which made it incredibly easy to root for them as a couple.

On His Knees is another scorching hot instalment to the series and it's one I'd highly recommend. You don't have to be familiar with the previous books as they all work as standalone stories but they're all so good that you really don't want to miss out. If you happen to be a fan of the author's Hard Ink series then you might appreciate a bonus appearance from a certain tattoo artist and his husband too!