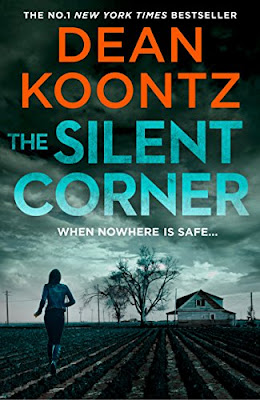 I very much need to be dead.

These are the chilling words left behind by a man who had everything to live for but took his own life. In the aftermath, his widow, Jane Hawk, does what all her grief, fear, and fury demands: find the truth, no matter what.

People of talent and accomplishment, people admired and happy and sound of mind, have been committing suicide in surprising numbers. When Jane seeks to learn why, she becomes the most-wanted fugitive in America. Her powerful enemies are protecting a secret so important so terrifying that they will exterminate anyone in their way.

But all their power and viciousness may not be enough to stop a woman as clever as they are cold-blooded, as relentless as they are ruthless and who is driven by a righteous rage they can never comprehend. Because it is born of love.

Review:
I've been a huge fan of Dean Koontz since I was a teenager but I've not really been reading thrillers and suspense for the last few years so I have to confess it's been a while since I read one of his books. Then The Silent Corner cropped up on Netgalley and I just couldn't resist requesting it. You know that feeling you get when you rediscover an old favourite author and start kicking yourself for missing out on a few years of their stories? That's totally how I felt pretty much as soon as I started reading this but the best thing is that I now have plenty of new books to binge read!

When her husband commits suicide leaving a chilling note that just says "I very much need to be dead" Jane Hawk is convinced that there is more to his death than meets the eye. As a member of the FBI she has the means to investigate and she quickly discovers a disturbing pattern of suicides under strange circumstances. When her family is threatened she is forced to go into hiding, quitting her job, selling her home and leaving her young son with distant friends she focuses all her energy into uncovering what could be a major conspiracy.

The Silent Corner was a totally addictive read, short snappy chapters swiftly built momentum and I found myself devouring the story at a record pace. Ever increasing rates of suicides and now murder suicides. Human programming. Nanotechnology. Multibillionaires who think they can do whatever they like with absolutely no consequences. This is seriously creepy and scarily easy to imagine actually happening in the not too distant future. Who says technology is always a good thing?

Jane can come across as a little cold and unemotional at times but it's quite easy to see that she is so devastated by everything thats happened that she has to lock it up tight just to keep going. She focuses all of her energy into figuring out what happened to her husband so that she can try to stop it happening to anyone else but it's very hard to investigate when you don't know who you can trust. I loved the strength she shows and the fierce determination she has to stop the bad guys no matter how much it costs her. She's a very easy character to root for and I can't wait to carry on with the series to see how things unfold. This was a fantastic start to the series and I think things are only going to get better from here!