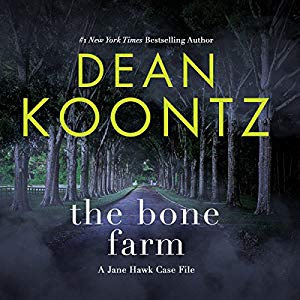 An audio original novella featuring bestselling author Dean Koontz's compelling new heroine, Jane Hawk. From the case files of the former FBI agent before she became the nation's most wanted fugitive - The Bone Farm details a desperate man-hunt for a serial killer before he murders again.

Katherine Haskell, a young college co-ed is on her way back to school, but she never makes it there. Instead, she becomes the latest prey of the rapist and murderer dubbed by the tabloids the "Mother Hater." He is a twisted soul who kidnaps young girls for pleasure then discards them.

Katherine is missing, but she's not yet dead. FBI agents Jane Hawk and her partner Gary Burkett must descend into the hell of this killer's mind to solve the case before it is too late. The question is - will they both get out alive?

Review:
I've been a Dean Koontz fan for years now and I'm really enjoying the Jane Hawk series so I was looking forward to reading The Bone Farm even though I don't often listen to audiobooks. As far as the audio goes I thought this story was read well and the narrators, Elisabeth Rogers & James Anderson Foster, did a good job with it but unfortunately I just didn't enjoy the actual story.

This is a prequel to the Jane Hawk series so it's back in the days before she was suspended from the FBI and Jane is working a missing persons case alongside her partner Gary. They know they're dealing with a serial killer but he keeps his victims alive for a long time before killing them so they're desperately trying to find him before he can murder the latest young woman he has abducted.

I think one of my biggest issues with the story was the amount of time we spend inside the killer's head, his thoughts were creepy and disturbing and I REALLY didn't want to hear so many of them. I also found that the story didn't have the amount of tension I'd expect from Dean Koontz because as a reader we know who the killer is from the beginning since much of the story is from his point of view. It's hard to build the suspense when you know who the bad guy is so yes we're watching Jane try to figure it out but she's always one step behind us which is a little frustrating.

To be honest I don't think this story really added anything worth knowing to the Jane Hawk series, it doesn't touch on anything that is happening in the full length books so it's only  aboutone random case Jane worked before she was suspended. Since I didn't find it very enjoyable and I don't think it really had any impact on the rest of the series I'd have a hard time recommending it to people but as always these things are down to personal taste and you may end up loving it so it wouldn't hurt to at least listen to a free sample before making up your mind.