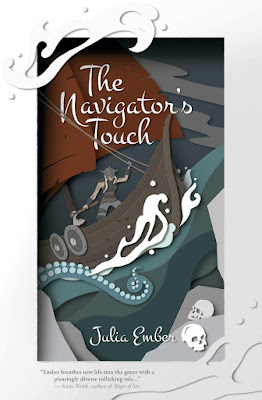 After invaders destroyed her village, murdered her family, and took her prisoner, shield-maiden Ragna is hungry for revenge. A trained warrior, she is ready to fight for her home, but with only a mermaid and a crew of disloyal mercenaries to aid her, Ragna knows she needs new allies. Guided by the magical maps on her skin, battling storms and mutiny, Ragna sets sail across the Northern Sea.

She petitions the Jarl in Skjordal for aid, but despite Ragna’s rank and fighting ability, the Jarl sees only a young girl, too inexperienced to lead, unworthy of help. To prove herself to the Jarl and win her crew’s respect, Ragna undertakes a dangerous expedition. But when forced to decide between her own freedom and the fate of her crew, what will she sacrifice to save what’s left of her home?

Inspired by Norse mythology and J.M. Barrie’s Peter Pan, this companion novel to The Seafarer’s Kiss is a tale of vengeance, valor, honor, and redemption.

Review:
The Navigator's Touch is a companion novel to The Seafarer's Kiss rather than a direct sequel, those who have already read the first book will be familiar with some of the characters but you could start with this book without getting lost. Ragna was the shield-maiden who rescued Ersel in the first book but this instalment is really her story, it starts before The Seafarer's Kiss then there is a small amount of crossover before it continues on past events we've already read about. We get to find out more about her childhood, what happened when her village was attacked, how she lost her hand and see if she manages to get revenge on the people who wronged her.

I love the way Julia Ember has used Norse Mythology for the base of this series, then the first book is her take on The Little Mermaid story while this one is more of an origin story for Captain Hook from Peter Pan, with a female Hook which just makes it even better! Ragna is a brilliant character, all her life she dreamed of becoming a warrior so it's something she trained hard for but when her village is attacked and she is captured by her enemy she has to use those skills to make her escape. She is absolutely consumed by her need for revenge which makes her come across as quite a hard character in the beginning, she is utterly ruthless and even when she manages to get her own ship she doesn't trust her men because they are all mercenaries.

What I really enjoyed was seeing how much Ragna changed and grew throughout the story as she slowly learned how to be a better leader, one who inspired loyalty through her actions rather than by fear. Ragna does treat Ersel quite badly in the beginning but she comes to realise how she affects the people around her and she does try to make amends for her bad behaviour.

Once again this story has a diverse cast of characters, there is an FF relationship and gender neutral characters who are just normal members of the group and not treated like they're there as part of a box ticking exercise. We are introduced to all kinds of creatures from Norse legends too which I really enjoyed.

The Navigator's Touch was everything I had hoped it would be and a wonderful companion to The Seafarer's Kiss, I already mentioned that you can read these books in any order and I'm very happy to recommend both to fans of mythology and retellings.

Source: Received from Interlude Press in exchange for an honest review